A native of Houston, Tresure Price is an American television personality best known for appearing on WE TV’s reality show, Beyond the Pole.

She holds a bachelor’s degree in mass communications from the University of Houston. Price moved to Atlanta to pursue her dreams of becoming a radio DJ.

Price also worked as a model and featured in several publications. She has her own line of hair extensions called The Tresure Box, which offers authentic virgin hair extensions. 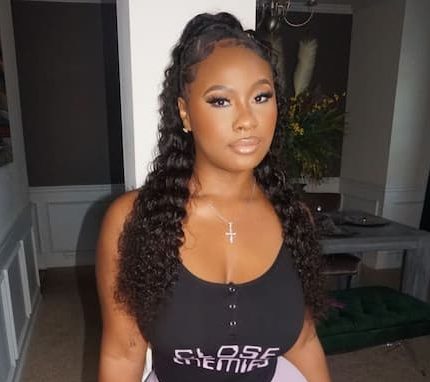 Price lives a very private personal life. She has managed to keep information about her family away from the public. We will provide this information as soon as it is available.

As earlier noted, Price is a very private person. It is therefore not known whether she is married, dating, or is single. This information will be provided as soon as it is available.

Price was a supporting cast member on season six of Love & Hip Hop: Atlanta. She first appeared in a cameo in season one of Leave It to Stevie, where she attends Stevie J and Yung Joc’s jacuzzi party.

Price later joined the supporting cast of Love & Hip Hop: Atlanta in season six, where she sparked a violent rivalry with Tommie after revealing she was in a relationship with a married man.

Tresure Price Beyond the Pole

Price is a cast on WE tv’s show Beyond the Pole. The show follow the lives of eight Atlanta strippers who are looking for a life beyond the stripping pole. This is following the Covid-19 pandemic which took over the world leading to many businesses get closed. Some of those affected were strip clubs.

Other cast members of Beyond the Pole include; Ms. Dime, Angel Kake, Empress Wildflower, Lyric Belleza, Virgo, Gigi Maguire, Ya Ya, and Milk Marie.

Price’s net worth is under review. We will provide this information as soon as it is available.