Henry enrolled in the School of Kinesiology and majors in Economics and he plans to major in Movement Science.

As a freshman, Tommy led freshman pitchers with 21 appearances out of the bullpen. He totaled 31 innings pitched with 39 strikeouts with three wins.

He picked up his first career win with 1.2 IP against Seton Hall and also recorded a season-high five strikeouts in his collegiate debut. 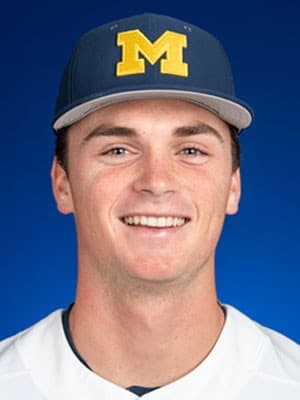 On April 4, 2017, Tommy pitched a career-high 3.2 innings of relief against Notre Dame earning the win.

On March 9, 2018, Tommy earned his first win of the season with six complete innings pitched at Lipscomb. Later on March 16, 2018, he struck out a career-high seven against Bowling Green.

On March 23, 2018, he threw six scoreless innings in a win against Michigan State, surrendering only two hits and striking out six. He later tossed a career-high eight innings in a win over Delaware.

Tommy pitched six shutout innings, striking out a career-high nine in a win at Northwestern on April 7, and on April 20 he allowed just one hit and struck out eight to earn the win with five scoreless innings against Penn State.

He surrendered just one earned run through 6.1 innings in a loss at Purdue on May 17. Tommy led Michigan with 81.2 innings pitched and struck out 77 batters on the season.

Tommy finished the season with seven wins and a 3.09 earned-run average through 15 starts.

Later on March 5, he was named Big Ten Conference Pitcher of the Week after eight scoreless innings with 12 strikeouts at Cal State Northridge on March 1.

Tommy tossed six scoreless innings, surrendering only two hits and no walks against Manhattan on March 14, and threw eight innings, giving up only three hits and striking out four in a win at Michigan State on March 29.

He made his only relief appearance of the season in a Big Ten Tournament game vs. Ohio State during which he struck out two batters in a hitless inning of relief.

On June 9, Tommy threw seven innings, striking out six, to earn the win over UCLA, sending the Wolverines to the College Baseball World Series.