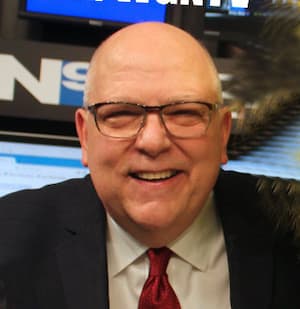 Tom Skilling born Thomas Ethelbert Skilling III is an American journalist working as a chief meteorologist at WGN-TV in Chicago since 1978.  Prior to joining WGN-TV, he served as the lead forecaster at WITI-TV in Milwaukee.

Skilling stands at an average height of 5 feet 7 inches. Skilling went through some major changes in his weight after undergoing gastric bypass surgery in March 2020. He previously weighed 292 pounds and currently, he weighs 172 pounds. That is a total of 120 pounds lost. Skilling expressed his happiness on his weight loss stating that he felt healthier.

Skilling was born and raised in the Chicago suburb of Aurora, Illinois. His parents are Betty C. Skilling and Thomas Ethelbert Skilling Jr. He is the oldest of his three siblings; Jeffrey Skilling, Sue Skilling, and Mark Skilling.

Skilling’s brother Jeffery Skilling, is an American white-collar criminal. He was the CEO of Enron Corporation, an American energy company in Houston, Texas. Skilling was convicted of felony charges relating to the collapse of Enron in 2006.

His sentencing was 24 years in prison. His sentence was reduced to 14 years in 2013 by the United States Department of Justice. Jeffery was released in February 2019 after serving 12 in jail.

Skilling attended West Aurora High School. After graduating from high school, he enrolled at the University of Wisconsin in Madison. He graduated with a bachelor’s degree in meteorology and journalism.

Skilling joined WGN-TV on August 13, 1978. He is the weekday chief meteorologist responsible for providing weather news on the WGN Evening show from 5-7 pm. Prior to joining WGN, Skilling worked for WITI-TV in Milwaukee. He was a top-rated meteorologist and lead forecaster.

In 2011, Skilling correctly predicted the Groundhog Day blizzard two weeks before it paralyzed the Chicago area. Aside from forecasting news, he also writing the daily weather column for Chicago Tribune. He has also narrated several documentaries including It Sounded Like a Fright Train and When Lightning Strikes for the station.

Skilling began his career in high school at the age of 14 when he was joined WKKD ad WKKD-FM. After studying WKKD’s weather reports and finding them inaccurate, he made a deal with the station. He forecast for seven days giving accurate weather reports. For giving accurate reports, he was hired to provide weather news three times a day.

After turning 18 years old, Skilling started reporting weather at WLXT-TV in Aurora. In college, he joined WKOW-TV and WTSO radio in Madison. In 1975, he got his first major position as a lead meteorologist at WITI-TV. Skilling hosts the annual tornado and severe weather and storms seminars at Fermilab in Batavia, Illinois.

Skilling is a receiver of the Honorary Doctorate of Humanities from Lewis University in Romeoville, Illinois. He has also received other two honorary awards from St.Mary’s of Minnesota and Aurora University. In 1999, the steroid 91888 Tomskilling, discovered by the Catalina Sky Survey was named in his honor.

Skilling is very private about his personal life hence information about his marital status is unknown. This information will however be updated as soon as it is available.

The average salaries of chief meteorologists in the US are in the range of $26, 122 – $696, 998 with a median of $124, 800. Skilling is one of the best chief meteorologists working for WGN with over 43 years of experience.  It is obvious that he earns a decent salary in the same range.

Skilling has an estimated net worth ranging from $1 million – $5 million. His main source of income is his career as a journalist and meteorologist. He has had the longest career of over 43 years.