A native of Hammersmith, London, United Kingdom, Tom Hardy is an English screenwriter, producer, actor, and former model. Behind studying acting at the Drama Centre London, he made his film debut in Ridley Scott’s Black Hawk Down.

Hardy attended Tower House School, Reed’s School, and Duff Miller Sixth Form College. He thereafter studied at the Drama Centre London and Richmond Drama School, now a part of Central Saint Martins. He has named Gary Oldman, with whom he would later work on Tinker Tailor Soldier Spy, as his “hero” and added that he mirrored scenes from Oldman while at drama school.

Edward Thomas Hardy was born in the Hammersmith district of London on 15 September 1977, the only child of painter and artist Anne (née Barrett) and novelist and comedy writer Edward “Chips” Hardy. He is of Irish descent on his mother’s side. He was raised in the East Sheen suburb of London. 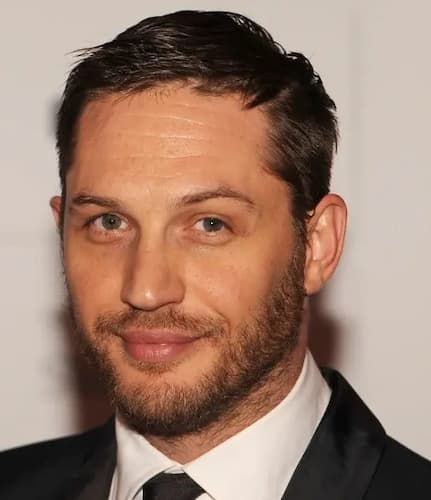 Hardy is happily married to Charlotte Riley. The partners tied the knot in July 2014 and together they have two kids including Louis Thomas Hardy.

Prior to Charlotte, he was married to producer Sarah Ward in 1999 but later divorced in 2004. After Sarah Ward, he started dating his ex-girlfriend, assistant director Rachael Speed with whom he has a son with.

Hardy has three kids. His first child, a son, was born in 2008 and he shares him with his ex-girlfriend, Rachael Speed. Together with Charlotte Riley, the actor has two kids, a son, and a daughter. Their son is named Louis Thomas Hardy.

Hardy has an estimated net worth of  $45 million.

Prior to the inaugural Invictus Games held in London in September 2014, he, along with other performers and athletes, read the poem “Invictus” in a promotional video.

In December 2018, he became the lead ambassador for the “Reorg Brazilian Jiu Jitsu foundation” which was launched in association with The Royal Marines Charity with the mission to provide a platform for operating personnel and veterans to learn Brazilian Jiu Jitsu, as part of their recovery pathway and to combat the challenge of mental health and physical disabilities. Hardy himself is a Brazilian Jiu Jitsu practitioner and has been seen training at Roger Gracie affiliate schools. He was awarded his blue belt in December 2020.