Thomas John Brokaw a native of South Dakota, is an American retired network television journalist and author. He co-anchored The Today Show from 1976 to 1981. He later became the anchor and managing editor of NBC Nightly News from 1982 to 2004. As an author, he has written several books including; The Greatest Generation and A Long Way from Home: Growing Up in the American Heartland.

Brokaw stands at an estimated height of 5 feet 7 inches and weighs about 71 Kg.  He has white hair and blue eyes.

Tom was born in Webster, South Dakota to his parents Eugenia Conley and Anthony Orville. His mother was a salesperson and a post-office clerk while his dad was a construction foreman for the Army Corps of Engineers. She died in 2011. Tom grew up with his two brothers William and Michael. His family lived in Bristol, Igloo, and Pickstown before eventually settling in Yankton.

Brokaw has been married to his wife author Meredith Lynn Auld since 1962. They have three daughters named Jennifer, Andrea, and Sarah. The couple own a ranch near Livingston, Montana, which they bought in 1989. 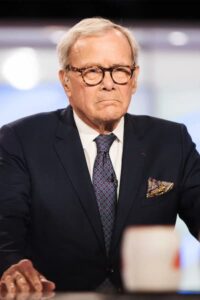 Brokaw was diagnosed with multiple myeloma a treatable but incurable blood cancer in 2013. This was after he was hospitalized on September 6, 2012, shortly after appearing on MSNBC’s Morning Joe. He later explained the reasons why he was hospitalized in a tweet saying that he accidentally took half a dose of Ambien in the morning. Tom disclosed that his cancer was in full remission in 2014.

Brokaw started his journalism career at KTIV in Sioux City, Iowa. He later moved to KMTV in Omaha, Nebraska, and WSB-TV in Atlanta. Tom joined NBC News in 1966. He became the White House correspondent for NBC in 1973. In 1976, he became the host of NBC’s Today Show.

Tom became the news anchor of NBC Nightly News in New York in 1982. In 1983, the show Nightly News with Tom Brokaw premiered. He gained immense popularity when he became the first English-language broadcast journalist to report the Fall of the Berlin Wall in 1989.

Tom held the first one-on-one American interviews with Soviet leader Mikhail Gorbachev and Russian President Vladimir Putin. Tom left Nightly News in 2004 but remained at NBC as Special Correspondent. He was the NBC analyst during the 2008 presidential election campaign.

In addition, Tom reported documentaries for the Discovery Channel and the History Channel. Tom was the announcer of the sudden death of NBC News Washington Bureau Chief and Meet the Press moderator Tim Russert in 2008. He later served as the host of Meet the Press until December 2008.

Aside from journalism, Tom is a member of the board of directors of the Council on Foreign Relations, the Committee to Protect Journalists, the International Rescue Committee, and the Mayo Clinic. He is also the host of The Boys in the Hall on Fox Sports Net. Tom was awarded the Presidential Medal of Freedom by President Barack Obama in 2014.

Brokaw published his book The Greatest Generation in 1998. The book details those who were raised in the United States during the deprivation of the Great Depression. He also talks about those who fought in World War II and those who came of age during World War II.

NBC announced on January 22, 2021, that after 55 years with the network, Tom would be retiring. He was one of the few anchors who have had the longest career in a network.