A native of  Santa Monica, California, United States, Tobey Maguire is an American film producer and actor. He is best known for playing the title character from Sam Raimi’s Spider-Man trilogy, a role he thereafter repeated in Spider-Man: No Way Home.

During his childhood, Maguire entertained the idea of becoming a chef and wanted to enlist in a home economics class as a sixth grader. His mother offered him $100 to take a drama class instead, and he agreed. The transient nature of his school years started to take a toll on Maguire emotionally, and after another relocation for his freshman year, he dropped out of high school and did not return. Instead, he pursued an acting career. By 2000, he had obtained his General Educational Development (GED), noting that during his school days, “I was not doing school; I was showing up, but… not really giving myself.”

Maguire was born and raised in Santa Monica, California, the United States by his parents Wendy Brown and Vincent Maguire. His parents separated when he was two years old, and he spent much of his childhood living with different family members. 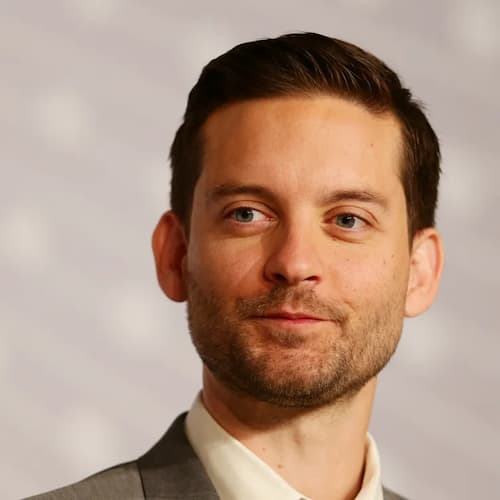 Maguire met jewelry designer Jennifer Meyer in 2003 while he was shooting Seabiscuit at Universal Studios, and they became engaged in April 2006, two months after they conceived a child. Their daughter was born in November that year. Meyer’s father, Universal studios’ head Ronald Meyer, reportedly helped Maguire regain his job after being fired from Spider-Man 2 in 2003.

The couple married on September 3, 2007, in Kailua Kona, Hawaii. They were blessed with a second child, a son, who was born in May 2009. On October 18, 2016, the pair announced their separation after nine years of marriage. In 2020, Meyer filed for divorce after four years of separation.

Maguire has an estimated net worth of  $75 Million

In 2002, Maguire emerged in Spider-Man, a film based on the superhero from Marvel Comics. It became a major success and made him an international star. As Spider-Man, he reprised his role in the sequels Spider-Man 2 (2004) and Spider-Man 3 (2007) and provided the voice for video game adaptations of the films. The three movies were all part of the highest-grossing movies each year.

Spider-Man garnered positive reviews when he starred as the superhero. “He’s big, round, soulful eyes convey a sense of wonder, and his instinct for understatement also serves him well here,” wrote Mark Caro of the Chicago Tribune. Due to content and creation difficulties, a proposed fourth Spider-Man film did not materialize. Sony instead rebooted the franchise. The Amazing Spider-Man was released on July 3, 2012, with a different actor playing the lead role, Andrew Garfield.

He started playing competitive poker in 2004. Several times he has finished in the money and was coached by poker professional Daniel Negron. ESPN covered the 2005, 2006, and 2007 World Series of Poker Main Event Championships with McGuire. Molly Bloom’s high-stakes poker games at The Viper Room attracted multiple celebrities in the mid-2000s, including Ben Affleck and Leonardo DiCaprio. They got negative press attention for apparently requesting Bloom “bark like a seal” for a $1,000 poker chip following a contest he nearly lost.