A native of Bremerhaven, Germany, Tiffani Faison is a well-known American restaurateur and celebrity chef. She is based in Boston, is a four-time James Beard Award Finalist for Best Chef: Northeast, and has served as a judge on Food Network’s television series Chopped.

Faison stands at a height of 5 feet 7 inches(1.70m) tall and weighs approximately 66kg.

Faison completed her college and graduated from Cambridge School of Culinary Arts.

Information regarding Faisons parents’ names is publicly not available. Faison talked to Boston Magazine in 2019 about her parents’ divorce, which occurred while she was in high school, as well as her relationship with her father. “Faison says her father was a heavy drinker, an absent father, and an angry man,” the magazine reported. Also, her siblings are not mentioned anywhere. We will update this section as soon as the information is available. 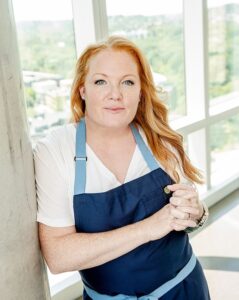 Faison is in a relationship with a woman named Kelly Walsh for nearly 15 years. According to Boston Magazine, the two met in 2007 at an industry party. Per the magazine, Faison liked that Kelly had no idea about her time on Top Chef (or likely her reputation), and they bonded over having dads in the military.

Faison has an estimated net worth of $1.9 million.

Faison first rose to culinary celebrity when she set the runner-up in the first season of Top Chef. She then took part in a single-episode cooking contest called 4 Star All-Stars which pitted four Top Chef season one competitors (David Martin, Faison, Stephen Asprinio, and Dieterle) against four season two contestants ( Sam Talbot, Elia Aboumrad, Marcel Vigneron, and Ilan Hall). Faison’s team scored the winning menu and obtained a $20,000 donation to the Susan G. Komen for the Cure charity. This episode aired on Bravo on June 6, 2007.

Faison returned as a competitor on season 8 of Top Chef and was eradicated in the sixth episode. She completed as runner-up in the Top Chef Duels 2014 competition. As of 2020, she is a judge on Chopped and participated as the judge to beat on one of the beats the judge episodes. She also made it to the finals of Chopped: Grudge Match, placing second to Marcus Samuelsson.

Faison has also been a culinary guest on such national television shows as NBC TODAY, CBS: America’s Test Kitchen, and This Morning.

Faison is presently the head chef and owner of Sweet Cheeks Q, a Texas-style barbecue restaurant in Boston’s Fenway District. Sweet Cheeks Q has been named Boston’s Best Barbecue by local and national media, and Forbes wrote that its “biscuits were the best in the world.”

In December 2015, she opened her acclaimed restaurant, Tiger Mama, a restaurant in Fenway focusing on Southeast Asian cuisine. She closed Tiger Mama in late October 2021 in order to focus on a new restaurant that will be located in the same space in Fenway (coming in late 2022).

In February 2018, Faison opened up her third Fenway restaurant, the “Adult Snack Bar” Fool’s Errand. Her venture Orfano, which serves Italian-American cuisine, opened in August 2019 and acquired a three-star review from The Boston Globe. In 2022, she opened Tenderoni’s, Bubble Bath and Dive Bar, within High Street Place, a new food hall in Downtown Boston.

Faison attended the Cambridge School of Culinary Arts (2002 to 2003). Just prior to appearing on Top Chef, Faison was employed as chef de partie under Daniel Boulud at his signature, Michelin Star restaurant in the Wynn Las Vegas, and also worked at the Tao restaurant at The Venetian in the same city.

After the airing of the final episode of Top Chef in May 2006, she took a summer position cooking at the Straight Wharf restaurant in Nantucket, Massachusetts, working under chefs Gabriel Frasca and Amanda Lydon.

In 2007, she was administrative chef at Todd English’s brasserie, Riche, in New Orleans, Louisiana. In May 2007, she cohosted a Greek Isles culinary cruise for Olivia, a lesbian lifestyle and travel services company.

She returned to Boston, and was Executive Chef at Rocca Kitchen & Bar (500 Harrison Avenue), a once-popular neighborhood space on Friday nights, until it closed in December 2010.