Teresa Giudice is an American reality television personality well known for appearing on The Real Housewives of New Jersey. Teresa also appeared on the show The Celebrity Apprentice 5 in 2012. She is known for her extravagant lifestyle and her financial legal cases.

She celebrates her birthday on the 18th of May every year.

Teresa stands at an average height of 5 feet 8 inches with a moderate weight of 62 kgs.

Teresa was born in New Jersey to her parents Giacinto and Antonia Gorga. Her parents were Italian immigrants from Sala Consilina. Teresa was raised alongside her brother Giuseppe “Joey” Gorga in the Roman Catholic faith. 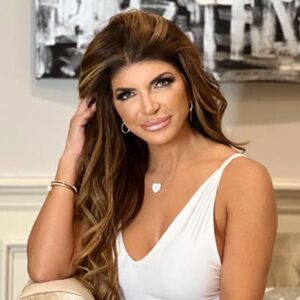 Teresa was previously married to Giuseppe “Joe” Giudice from 1999 to 2019. They finalized their divorce in September 2020 after 20 years of marriage. Joe was imprisoned for 41 months from March 2016 due to fraud and was later deported to Italy.

Teresa is in a relationship with her boyfriend called Luis “Louie” Ruelas. She introduced her boyfriend to her family during dinner in 2021.

Teresa and her ex-husband have four daughters called Gia, Gabriella, Audriana, and Milania Guidice. They have all appeared in some episodes of Real Housewives of New Jersey.

Teresa has an estimated net worth of $500,000 as of 2022 from her successful career as an entrepreneur and reality television personality.

Teresa began appearing on the reality show Real Housewives of New Jersey since its inception in season 1. Her family, lifestyle, and businesses have all been documented on the show. She is known for living an extravagant lifestyle in New Jersey together with her co-stars.

Teresa worked as an associate buyer for Macy’s before she was cast in The Real Housewives of New Jersey. She then co-authored three cookbooks Skinny Italian (May 4, 2010), Fabulicious (May 3, 2011), and Fabulicious!: Fast & Fit (May 8, 2012) that included recipes she was taught by her mother.

Teresa then released her first memoir Turning the Tables: From Housewife to Inmate and Back Again in February 2016. The memoir is about her highly publicized legal issues and her time in jail. In 2012, Teresa was one of the casts of Donald Trump’s The Celebrity Apprentice 5. Guidice also created a line of bellini cocktails called Fabellini.