Teddi Jo Mellencamp Arroyave a native of Indiana is an American television personality and actress. She is best recognized for appearing in the reality tv show The Real Housewives of Beverly Hills. She also appeared as a Houseguest in the third season of Celebrity Big Brother.

Mellencamp stands at an estimated height of 5 feet 5 inches (1.65 tall) and weighs about 60 Kgs. She has long blonde hair and beautiful dark brown eyes. Further details about her body measurements are still under review.

Teddi was born and raised in Bloomington, Indiana. She was born to her parents John Mellencamp and Victoria Granucci. She has one sister named Jistice Mellencamp and two half-brothers Hud and Speck Mellencamp.

Mellencamp is happily married to her husband Edwin Arroyave. He is the CEO and Founder of the security company Skyline Security Management. The married couple tied the knot in 2011. They have three children together; Dove Mellencamp Arroyave, Slate Arroyave, and Cruz Arroyave. She is stepmother to Edwin’s daughter Isabella from his previous marriage. 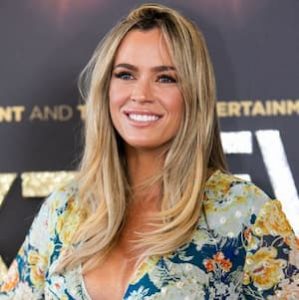 Mellencamp and her husband Edwin have three children together; Dove Mellencamp Arroyave, Slate Arroyave, and Cruz Arroyave. She is stepmother to Edwin’s daughter Isabella from his previous marriage.

Teddi started a weight loss program called “All In by Teddi”. She started the program after losing 80 lbs after having her son Cruz. In 2020, the program was under criticism after social media influencer Emily Gellis Lande shared some anonymous messages from Teddi’s former clients.

They claimed that the program restricted them to 500-1000 calories a day and had to do an hour of cardio daily. She came out to defend her program claiming that their meals do not have a specific calorie count.

Teddi came into prominence after joining the cast of the reality tv show “The Real Housewives of Beverly Hills”. She has also appeared in other tv shows like Flipping Out, Vanderpump Rules, and Celebrity Family Feud. In addition, she is the founder and owner of “All In by Teddi”, a lifestyle and fitness company. She also appeared as a Houseguest in the third season of Celebrity Big Brother. She was the first to be evicted.

Mellencamp has an estimated net worth of $15 million as of 2021.