Tamela Jean Mann a native of Limestone County, is an American gospel singer and actress. She started her singing career with the gospel group Kirk Franklin and the Family. She featured as a soloist o several tracks like; “Don’t Take Your Joy Away”, “Now Behold the Lamb”, and “Lean on Me”.

Mann released her debut studio album in 2005. Her single “Take Me to the King” from her third album Best Days was certified Gold by the RIAA. As an actress, she has appeared in; I Can Do Bad All By Myself, Diary of a Mad Black Woman, Madea’s Family Reunion, Madea’s Class Reunion, Meet the Browns, and What’s Done in the Dark.

Tamela stands at an estimated height of 5 feet 4 inches (1.65 meters) and weighs about 65 Kgs (143 lbs). Her hair is black, however, she often changes her hair color. Her eyes are brown in color. Further details about her body measurements will be updated.

Mann has been very open with her weight loss journey. She talked about her decisions to lose weight in an interview. She needed to change diffrent areas of her life, therefore, she decided to team up with weight watchers. She was able to lose 55 pounds.

Mann was born and raised in Fort Worth, Texas. She was born to her parents whose information she has not yet disclosed. Mann is the youngest of 14 children. She grew up in a spiritual home and went to Church of God in Christ. Her mother believed in and exercised solid biblical principles.

Tamela has been happily married to her husband David Mann for 33 years now.  The two met in the mid-80s after Tamela went to watch David and his former music group perform. David Munn is also an actor and singer.

Mann and his wife Tamela have raised five children. David has two children from his previous relationship; Porcia and Tiffany. He has two children with his wife; David Jr. and Tia. Their fifth child is their niece Sonya. David had thirteen grandchildren. 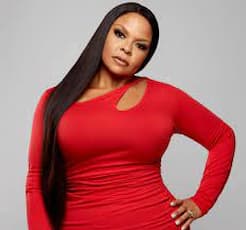 Mann started her singing career with Kirk Franklin and the Family. She featured as a soloist o several tracks like; “Don’t Take Your Joy Away”, “Now Behold the Lamb”, and “Lean on Me”. As an actress, she began acting in 1999. She made her debut in the stage play I Can Do Bad All By Myself.

She later appeared in; Meet the Browns, Madea’s Family Reunion, Madea’s Class Reunion, Diary of a Mad Black Woman and What’s Done in the Dark. She also appeared in The Tonight Show with Jay Leno, and Tyler Perry’s House of Payne. Her family has a reality show on BET called “It’s a Mann’s World”.

Mann started a label Tillymann Music Group alongside her husband David in 2005. She released her solo album Gotta Keep Movin in 2005. Her live album The Live Experience was released in 2007. Mann released her second studio album The Master Plan in 2009.

On August 14, 2012, her third album was released. In 2014, Mann won Stellar Award’s “Best Female Gospel Artist of the Year” and BET Award’s Best Gospel Artist. Her album Best Days was announced by Billboard as the Gospel Album of the Decade.

Tamela Mann Take Me To The King

Mann released her single “Take Me to the King” on June 12, 2012. It is the lead song of her third studio album Best Days. The song became a huge success, topping the US Billboard Gospel Songs chart for 19 consecutive weeks. The song was also nominated for “Best Gospel/Contemporary Christian Music Performance” at the 55th Grammy Awards. “Take Me to the King” was certified Gold by the RIAA.

Mann has an estimated net worth of $6 million. However, this is combined together with her husbands net worth.