Talen Horton-Tucker is an American basketball player for the Los Angeles Lakers of the NBA. He played college basketball for the Iowa State Cyclones.

Horton-Tucker went to St.Matthias School from first grade to eighth grade. Since 4th grade, he played on the basketball team there until he graduated.

Horton-Tucker was always one of the stars on the team and his classmates often told him he would make it to the NBA.

His number 5 was later retired at St.Matthias after he was accepted into Iowa State. 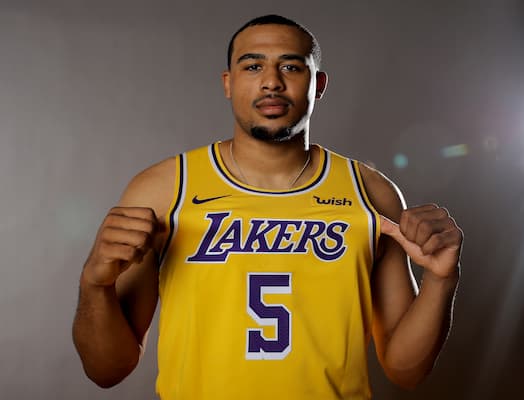 Horton-Tucker played at Simeon Career Academy where he helped the Wolverines to three-straight City Championships.

In ESPN’s ranking, he is a four-star recruit. He committed. He committed to Iowa State in October 2017, choosing the Cyclones over schools such as Illinois and Xavier.

Horton-Tucker was selected number 46 in the second round by Los Angeles Lakers in the 2019 NBA Draft.

General manager Rob Pelinka explained their pick on Horton-Tucker saying; ” What we liked about Talen is he’s from Chicago, he’s got grit and grind to him.

Just really long and versatile. Strong defender, and playmaker. I think he’s going to be a really versatile player because his wingspan is elite. We see him as a guy who can switch, and guard multiple players.

He’s got a developing three-point shot, too. If he learns to do that, he can be a really, really strong guard in the league.”