Stephen Glenn Martin a native of Texas, is an American actor, comedian, writer, producer, and musician. He is the recipient of five Grammy Awards, a Primetime Emmy Award, and an Honorary Academy Award.

In addition, he received the Mark Twain Prize for American Humor, the Kennedy Center Honors, and an AFI Life Achievement Award. His career goes back to the 1960s when became a writer for The Smothers Brothers Comedy Hour.

He went on to frequently host Saturday Night Live. He has appeared in films like; The Jerk, Dead Men Don’t Wear Plaid, The Man with Two Brains, Three Amigos, Planes, Trains and Automobiles, and Dirty Rotten Scoundrels.

Steve stands at an estimated height of 5 feet 11 (1.81 meters) and weighs about 70 Kg. Further details about his body measurements will be updated soon. 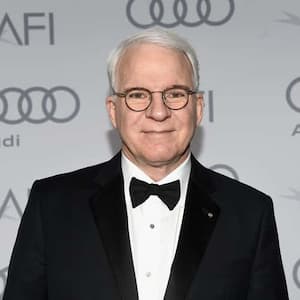 Steve was born in Waco, Texas, and raised in Inglewood, California. The family later moved to Garden Grove, California. He was born to his parents Mary Lee and Glenn Vermon Martin a real estate salesman and aspiring actor. He was raised alongside his older sister Melinda. Steve is of English, Scottish, Welsh, Scots-Irish, German and French descent.

Steve dated his co-star Bernadette Peters in the late 1970s and early 1980s. The two appeared in The Jerk and Pennies from Heaven. He later dated Mary Tyler Moore and Karen Carpenter. Martin married his co-star actress Victoria Tennant on November 20, 1986. They finalized their divorce in 1994. Martin is currently married to his wife writer and former New Yorker staffer Anne Stringfield. They tied the knot on July 28, 2007. Their first child a daughter named Mary Martin was born in December 2012.

Steve has one daughter and his only child named Mary Martin. His wife gave birth to their daughter in December 2012. Martin was 67 years old at the time of his daughter’s birth.

In 1977, he released his comedy album Let’s Get Small which includes the track “Excuse Me”. His second album A Wild and Crazy Guy was released in 1978. It reached the No. 2 spot on the U.S. sales chart. The album’s last song “King Tut” was sung and written by Martin. It was backed by the “Toot Uncommons,” members of the Nitty Gritty Dirt Band.

Steve started his acting career in the 1972 film Another Nice Mess. He went on to star in the 1974 Canadian travelogue production The Funnier Side Of Eastern Canada. In 1982, he appeared in the comedy The Jerk: Dead Men Don’t Wear Plaid. In 1993, he also appeared in The Man with Two Brains.

In 1990, he re-teamed with Moranis in the Mafia comedy My Blue Heaven. He went on to appear in Lawrence Kasdan’s Grand Canyon. Martin appeared in the 1997 thriller The Spanish Prisoner. In 2003, Martin starred in Bringing Down The House.

As a writer, Steve has written several books including; Picasso at the Lapin Agile in 1993. In addition, he wrote various articles for The New Yorker. Steve co-wrote and produced Traitor. Some of the novellas he has written include; Shopgirl and The Pleasure Of My Company.

Steve started playing the banjo when he was 17 years old. He mainly learned how to play the instrument with the help of John McEuen. John’s brother managed Martin and the Nitty Gritty Dirt Band. The band played on his hit song “King Tut”. Martin played banjo on Earl Scruggs’s remake of “Foggy Mountain Breakdown” in 2001.

Steve also played banjo together with the Steep Canyon Rangers on A Prairie Home Companion in June 2009. In April 2013, Steve released his album Love Has Come for You in which he collaborated with Edie Brickell.

The two also released the second installment of their partnership called So Familiar in 2015. They also appeared in the multi-award-winning documentary film The American Epic Sessions.