Stephen Anthony Smith a native of New York, is an American sports television personality, sports radio host, and sports journalist. He is currently serving as a commentator on ESPN’s First Take.

In addition, he frequently appears as an NBA analyst on SportsCenter and ESPN on NBA Countdown and NBA broadcasts. Smith is the host of The Stephen A. Smith Show on ESPN Radio. He appears as a columnist for ESPNNY.com, ESPN.com, and The Philadelphia Inquirer.

Stephen stands at a height of 6 feet 1 inch (1.85 meters). He is of moderate weight. His hair is black and paired well with his dark brown eyes.

Smith was born in The Bronx, New York, and raised in Queens. His mother’s name is Janet Smith. His parents are natives of Saint Thomas, U.S. Virgin Islands. His father was a manager at a hardware store. Smith was raised alongside his five siblings; four sisters and a brother that died in 1992 after a car accident.

Stephen appears to be currently single. He has never been married before. However, he was once engaged but never proceeded with the wedding. In an interview with GQ, he stated that the relationship did not work out. In the 2019 interview, he disclosed that he has two daughters. 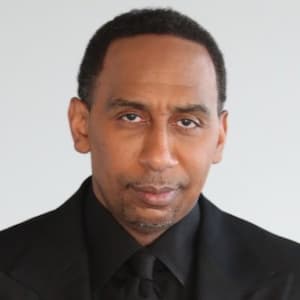 Smith started off his career in print media working for Winston-Salem Journal, Greensboro News and Record, and the New York Daily News. He moved to The Philadelphia Inquirer as a writer. He became the Philadelphia 76ers NBA columnist and ended up as their general sports columnist.

He stopped working for Inquirer in 2008 and started his own blog stephena.com. As a radio host, Smith joined WEPN to host a weekday noon radio show. In 2007, the show was moved to the 2–4 p.m. slot. The second hour of the show was broadcast nationally on ESPN Radio.

Smith moved to Sirius XM Radio in 2013 but went back to ESPN on January 17, 2017. Smith made his tv debut in 1999 on CNN/SI. In 2005, smith became a host for Quite Frankly with Stephen A. Smith on ESPN. He went on to appear on ESPN shows like the reality tv series Dream Job.

In 2012, Smith became a permanent anchor on ESPN’s First Take. He signed a $3 million contract with ESPN in 2014. As an actor, Smith made a cameo appearance in the ABC soap opera General Hospital. He was in the 2007 film I Think I Love My Wife.

Smith is one of the top journalists working for ESPN, therefore, he earns a total of $12 million per year. On top of the $8 million salary he earns, he gets another $4 million through a production contract.

Stephen A. Smith Net Worth