A native of Miami, Florida, Sophia Rose Stallone is an American model and Instagram Celebrity best known for being the daughter of famous actor Sylvester Stallone and model Jennifer Flavin.

Stallone stands at a height of 1.7 m.

Stallone was born to her parents Sylvester Stallone (father), an American actor, screenwriter, director, and producer, and Jennifer Flavin (mother) a former American model and current entrepreneur and business owner. 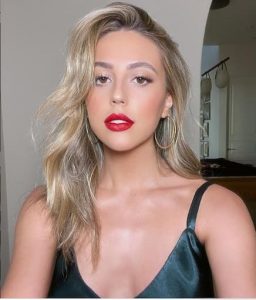 Stallone is currently in a relationship with footballer Connor Spears who she met at the University of California. They both like posting their cute and adorable pictures on Instagram.

Stallone attended the University of Southern California where she earned a degree with a major in Communications and a minor in Entrepreneurship and Film. She wanted to pursue an Art History major but later switched to Communications.

Stallone followed in her mother’s footsteps to start her career in modeling soon after her education. She has created an interest in fashion and wants to be a fashion idol.

Also, she was a guest judge of Lifetime’s project runway a Bravo’s Emmy-winning competition series.

Stallone has an estimated net worth of $10 million.