Sharon Escobar is a model, influencer, philanthropist, and the wife of Enner Valencia, the captain of Ecuador’s national team and a professional football player for the Turkish club Fenerbahce. He plays as a forward on the team.

Her husband Enner holds the record for most goals at the World Cup finals for his national team.

As of 2022, it is not yet known how old Sharon is. She is yet to share her date and year of birth.

Escobar and Valencia got married in 2016 after dating for a while. Her husband was previously married to Sinthyia Pinargote Chumo. The couple had one child together, a daughter before they divorced. In 2016, his ex-wife, Sinthyia filed a warrant against the player over unpaid child support. It was, however, revoked.

Enner would later defend himself by saying that his ex-wife only wanted to tarnish his image and stop him from seeing his daughter. He also claimed that she wanted to use the alimony to purchase luxury cars and other material things. 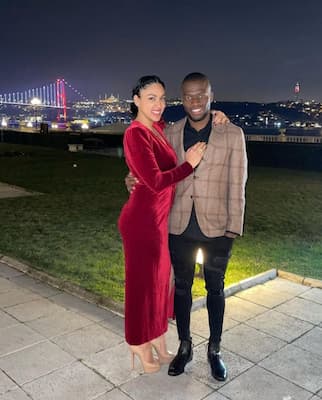 Escobar and her husband Valencia, have four children together. Their names are Beira, Amelia, Annalia, and David.

Get To know Enner Valencia

Valencia is an Ecuadorian professional footballer who plays as a forward for the Süper Lig club Fenerbahçe. He is also the captain of Ecuador’s national team. He has previously played for Emelec in Ecuador. While there Valencia won the 2013 Ecuadorian Serie A and was awarded the Copa Sudamericana Golden Boot in 2013.

He was born on November 4, 1989, in Esmeraldas, Ecuador. His parents are Bolivia Lastra and Remberto Valencia. Valencia has two sisters named Erci and Ericka Valencia. In 2020, his sister Erci was taken hostage in San Lorenzo by an armed gang and held for 10 days. She was eventually released unharmed.