Sebastian Maniscalco a native of Arlington Heights, Illinois, is an American stand-up comedian and actor. Throughout his career, he has released five comedy specials. He has also featured in several films including Green Book in 2018 and The Irishman in 2019.

The stand-up comedian stands at an approximated height of 5 feet 11 inches. He is of moderate weight. There are no further details about his body measurement. However, these details will be updated as soon as they are available. 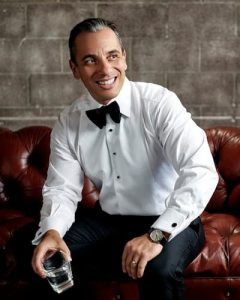 Maniscalco was born and raised in the Chicago suburb of Arlington Heights, Illinois. His parents are Italian immigrants. His father Salvatore Maniscalco, immigrated to the United States at the age of 15 together with his family.

Sebastian is happily married to his wife Lana Gomez. The two tied the knot in August 2013. There is no much information about his wife Lana and their marriage in general. The couple has two children; a daughter named Serafina after Sebastian’s grandmother, born in May 2017, and a son named Caruso born in June 2019.

Sebastian went to Northern Illinois University where he graduated with a degree in communication studies in 1995. While in school, he was the president of the Sigma Pi fraternity chapter.

Sebastian began his career in 1998 performing at open mics. He later began performing at The Comedy Store in West Hollywood, California in 2005. He has done five hour-long specials and half-hour for Comedy Central Presents. On June 2, 2009, he released his first special Sebastian Live.

His other three specials were aired on Showtime. What’s Wrong with People? was released on January 5, 2012, Aren’t You Embarrassed? on November 14, 2014, and Why Would You Do That? in 2016. He has featured in Vince Vaughn’s Wild West Comedy Show: 30 Days & 30 Nights – Hollywood to the Heartland.

Maniscalco co-hosts The Pete and Sebastian Show alongside comedian Pete Correale. On February 27, 2018, he published his memoir Stay Hungry. a Netflix special of the same name was released on January 15, 2019. Sebastian made his film debut in 2018 in the film Green Book as Jonny Venere.

He played the role of “Crazy” Joe Gallo in Martin Scorsese’s The Irishman alongside Robert De Niro, Joe Pesci, and Al Pacino. His new show Well Done With Sebastian Maniscalco premiered on August 12, 2021, on Discovery+. In the show, he gets to explore food culture and etiquette alongside friends and family.