Conant started cooking at a young age, taking cooking classes at the local community college at age 11. At 15, he enrolled in W.F. Kaynor Technical High School for culinary arts and then attended the Culinary Institute of America (CIA)

Conant was born to his parents in Waterbury, Connecticut. He is the son of (Mother) Anne (Varrone) Conant and Charles Conant (Father). He is of Italian descent on his mother’s side. It is not known if he has any sisters or brothers. 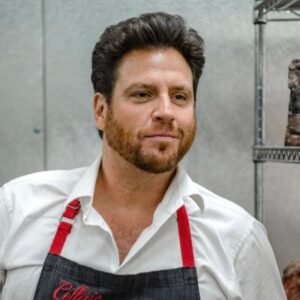 Conant has been married twice. He is married to his longtime girlfriend Meltem Conant. The couple tied the knot in 2007 in Bodrum, Turkey. He was earlier married to entrepreneur Chris Cannon.

The two were also business partners and had two restaurants in their name. Their marriage ended in divorce and Scott did away with his partnership at Alto and L’Impero in 2007.

Conant has an estimated net worth of $5 million.

Conant started cooking at a young age, taking cooking classes at the local community college at age 11. At the age of 15, he enrolled in W.F. Kaynor Technical High School for culinary arts and then went to the Culinary Institute of America (CIA).

While he was studying at the CIA, he interned at the famous New York City restaurant San Domenico, an experience that had a decisive impact on the young chef.

After graduation, Conant spent a year in Munich, Germany, mastering the art of pastry at the Hotel Bayerischer Hof. He then returned to the United States and San Domenico, working as a sous chef and helping the restaurant garner three stars from The New York Times.

In 1995, he was appointed by Cesare Casella to be chef de cuisine at Il Toscanaccio, an Upper East Side Tuscan-style restaurant. After one year, Conant went on to revamp two institutions: Barolo in SoHo and Chianti on the Upper East Side. He then became executive chef at City Eatery, located on the Bowery in New York City.

Conant and his modern take on Italian cuisine got the attention of New Yorkers and earned him a loyal following and a glowing two-star review from The New York Times in 2000.

Conant is a frequent judge on the notable Food Network show Chopped which is one of Food Network’s highest-rated programs. During the show, many people know Scott as the choosy judge who hates onions. Scott has also appeared on the Today Show, Live with Kelly & Michael, The Chew, CBS’ The Talk, and Good Morning America.