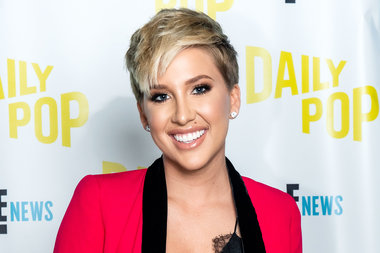 Savannah Chrisley born in Georgia, Atlanta, is an American reality tv personality, former beauty queen, actress, and entrepreneur. She is best known for starring in the reality tv show, Chrisley Knows Best beside her wealthy family.

She is also known as the daughter of real estate tycoon Todd Chrisley. Chrisley also stars in the show’s spin-off called Growing Up Chrisley alongside her brother Chase Chrisley.

The former beauty pageant competitor stands at an approximated height of 5 feet 7 inches and weighs about 58 kgs. On to her body measurements, she measures 32-24-32 inches. Chrisley has blond hair paired well with her beautiful blue eyes. 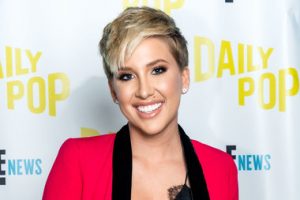 Chrisley was born and raised in Georgia, Atlanta. She was born to her parents Todd Chrisley and Julie Chrisley. Todd is a real estate tycoon while her mother is a housewife who loves to cook. Julie stars in the web series What’s Cooking With Julie Chrisley. This is not her parents’ first marriage.

Todd was previously married to his high school sweetheart Teresa Terry while Julie was married to her high school boyfriend. Todd and Julie tied the knot in 1996. Savannah has four siblings. Two of them, Lindsie Chrisley Campbell and Kyle Chrisley are from Todd’s first marriage. The other two are Chase Chrisley and Grayson Chrisley.

Savannah enrolled at Lipscomb University in Tennessee. She later transferred to Belmont University to pursue a career in the music business. Even though she is not a singer herself, she is passionate about the music industry and hopes that she might become a music manager or agent.

Chrisley had previously been engaged to Nic Kerdiles, a pro hockey player. The two met on Instagram and immediately hit it off. They started dating in November 2017. After a year, nic proposed to her. However, their engagement didn’t last long.

In September 2020, Chrisley revealed that the two had broken off their engagement. She went on to say that there was no bad blood between them, only love and respect towards each other.

On to her previous relationships, Savannah dated country singer Blaire Hanks in 2015 and NBA basketball player Luke Kennard in 2017 before getting together with Nic Kerdiles.

Savannah stars in the reality tv show Chrisley know Best besides her rich family. The show airs on USA Network. Its original release date was on March 11, 2014.  The show initially took place in Roswell and Alpharetta, then moved to Nashville, Tennessee on its fourth season.

As a former beauty pageant competitor, she participated in the Miss Tennessee Teen USA in 2016, which she won. She also participated in Miss Teen USA Pageant which she unfortunately lost. Savannah was featured in the 2016 film Sharknado 4: The 4th Awakens. Chrisley is the founder and owner of SASSY, a cosmetic company.

Currently, Savannah’s net worth is still under review. On the other hand, her father has an estimated net worth of $5 million.