Rome Flynn is an American actor, musician, and model. He is best known for starring in the CBS daytime drama The Bold and the Beautiful as Zende Forrester Dominguez.

Flynn plays the character of Gabriel Maddox in the ABC drama How to Get Away With Murder. As a musician, he has released several songs including Brand New” and “Keep Me In Mind”.

Flynn stands at a tall height of 6 feet and weighs around 75 Kgs. There is no further detailed information about his body measurements. However, according to his pictures, he is well built and seems to be a gym enthusiast. 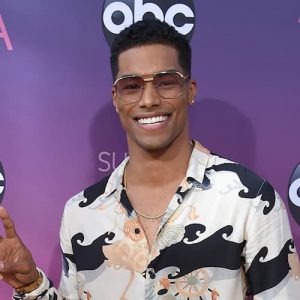 Flynn was born and raised in Springfield, Illinois. His middle name is Trumain. He was born to his mother Nickey Alexander. He has not disclosed any information about his father. Flynn is one of eight kids.

Flynn is currently not married.  He was previously in a relationship with Camia Marie a model.  Rome dated Molly Noriko who is also the mother of his six-year-old daughter Kimiko Flynn. There is no further information about the mother of his child.

Fynn has a daughter named Kimiko Flynn born on December 12, 2014.  His adorable daughter is six years old. The mother of his child is Molly Noriko. There is no much information regarding Molly’s life.

Flynn professionally began his career after being cast as Leon in the television movie Drumline: A New Beat, the sequel to the 2002 film Drumline.  He landed the major role of Zende in the series The Bold and The Beautiful in 2015.

In 2016, he was cast for a role in the film adaptation of Gretchen McNeil’s novel TEN. In addition, Flynn has guest-starred in several episodes of CBS crime dramas NCIS: New Orleans and MacGyver. He joined the cast of The Haves and The Have Nots playing the role of RK in 2015.

Flynn plays the role of Tevin Wakefield in the second season of the Netflix series Raising Dion. He was also cast for the recurring role of David in the fourth and final season of Dear White People. In 2021, Flynn joined the cast of With Love playing the role of Santiago Zayas.

Aside from acting, Flynn is also a great musician. He has released several songs including “Brand New”, “Keep Me In Mind” and “Drunk With You”. Rome won the 2018 Daytime Emmy Award for Outstanding Younger Actor in a Drama Series.

Rome Flynn The Bold And The Beautiful

In May 2015, Flynn was cast for the role of Zende Forrester Dominguez on the tv series The Bold And Beautiful. He played this role until September 8, 2017, after announcing that he had decided to leave the show.

Rome Flynn How To Get Away With Murder

Flynn plays the role of Gabriel Maddox a law student in the ABC drama How to Get Away with Murder starring actress Viola Davis. He first made an appearance on the show’s fourth season finale. He became a regular for its fifth season.

As of 2020, Flynn’s net worth is estimated to be $500, 000. He has garnered all his wealth from his career as an actor, model, and singer. Some of his notable roles include; Zende Forrester Dominguez in The Bold and the Beautiful and Gabriel Maddox in How to Get Away With Murder.