A native of New York, New York, United States, Phoebe Cates is a former American actress, known mainly for her roles in films such as Fast Times at Ridgemont High, Drop Dead Fred, and Gremlins.

Cates attended the Professional Children’s School and the Juilliard School. At the age of ten, she began modeling, emerging in Seventeen and other teen-oriented magazines. A few years later, she wanted to become a dancer.

Eventually, she acquired a scholarship to the School of American Ballet but quit after a knee injury at age 14. Next, she began a short, successful career as a model. Cates said that she disliked the industry: “It was just the same thing, over and over. After a while, I did it solely for the money.” 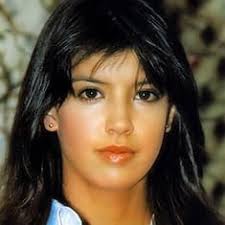 Cates was born and raised in New York, New York, United States by her caring and devoted parents. She is the daughter of Lily and Joseph Cates (originally Joseph Katz), who was a major Broadway producer and a pioneering figure in television, and who helped create The $64,000 Question.

Her uncle, Gilbert Cates, produced numerous television specials, often in partnership with Cates’s father, as well as several annual Academy Awards shows. Cates is a Eurasian; both her father and maternal grandmother were of Russian Jewish descent, whereas her maternal grandfather was Chinese-Filipino. Cates’s mother was born in Shanghai, China. Her siblings are Valerie Cates, Alexandra Cates, and Phillip Cates.

In 1983, Cates met actor Kevin Kline during her audition for a role (awarded to Meg Tilly) in The Big Chill. They were both dating other people at the time but became romantically involved two years later. In 1989, they married, and she changed her name to Phoebe Cates Kline. They moved to the Upper East Side of Manhattan in New York across Fifth Avenue from Central Park where they raised their two kids, son Owen Joseph Kline (born 1991) and daughter Greta Kline (born 1994).

Cates has an estimated net worth of $35 Million.

Cates finished her modeling and then dance careers to begin acting. Her first acting career was in Paradise in 1982. Later on, she starred in Fast Times at Ridgemont High. Later on, Phoebe also co-starred in Private School alongside Matthew Modine and Besty Russell.

In 1994, Cates starred in the fact-based romantic comedy-drama Princess Caraboo (1994). This was also the last film in which she co-starred with her husband, Kevin Kline. In 1994, Cates retired from acting to raise her children, Owen and Greta