A native of  Queens, New York, United States, Phil Rosenthal is an American producer and television writer who is the writer, creator, and executive producer of the CBS sitcom Everybody Loves Raymond.

In current years, he has presented food and travel documentaries I’ll Have What Phil’s Having on PBS and Somebody Feed Phil on Netflix.

After high school, Rosenthal attended Hofstra University, from which he graduated in 1981. 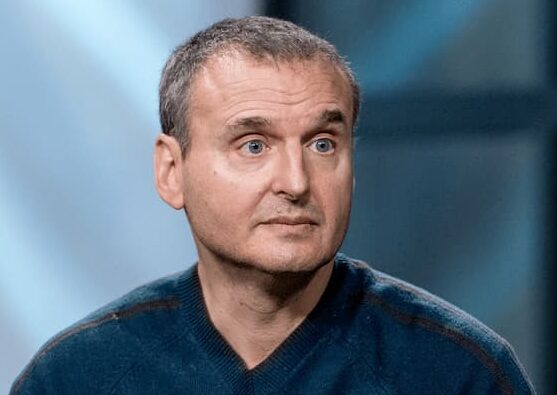 Rosenthal was born in Queens, New York, United States, and brought up in New City, New York, by his caring and devoted parents. Information about his parents is publicly not available. We will update this section once the information is available. He has one sibling; Richard Rosenthal.

Rosenthal is happily married to his beautiful wife Monica Horan who is a famous American actress best known for her role as Amy MacDougall-Barone on the television sitcom Everybody Loves Raymond. The couple are blessed with two kids; Lily Rosenthal, and Ben Rosenthal.

Rosenthal has an estimated  net worth of $200 million.

Rosenthal acts on the Creative Council of Represent.Us, a nonpartisan anti-corruption organization. He and the Rosenthal Family Foundation established a national campaign called “Somebody Feed The People” to help organizations that provided meals to voters waiting in long lines during the 2020 United States Presidential Election, matching contributions up to $250,000.

Rosenthal is known for starring in projects such as James L. Brooks’ Spanglish, 30 Rock, Curb Your Enthusiasm, The Simpsons Movie (a big-screen adaptation of the long-running TV series),  and Jake Kasdan’s feature, The TV Set. Philip has authored You’re Lucky You’re Funny: How Life Becomes a Sitcom, which was published on October 21, 2006. He recounts how his life led to the success of Everybody Loves Raymond.

He directed President Bill Clinton in a White House Correspondents’ Dinner video, which was shown to wide recognition at the April 2000 event. He co-wrote the 9/11 telethon America: A Tribute to Heroes, which circulated on all four networks and won a Peabody Award and an Emmy nomination for Outstanding Writing.

Despite his little knowledge of Russian culture, he directed and wrote a documentary film for Sony Pictures called Exporting Raymond, which defines his efforts to adapt Everybody Loves Raymond for Russian television.

In August 2015, Philip, as one of 98 members of the Los Angeles Jewish community, was signed an open letter supporting the proposed nuclear agreement between Iran and six world powers led by the United States “as being in the best interest of the United States and Israel.”