A native of Orange County, California, United States, Nicolle Wallace is an American television host and author. She is well known for her work on the politics program Deadline and anchor of the MSNBC news: White House and a former co-host of the ABC daytime talk show

A 1990 graduate of Miramonte High School, Wallace received a Bachelor of Arts in mass communications from the University of California, Berkeley in 1994 and a master’s degree from Northwestern University’s Medill School of Journalism in 1996.

Wallace was born on February 4, 1972, in Orange County in Southern California. The most aged of four siblings, she grew up in the Bay Area suburb of Orinda in Northern California. Her father was an antique dealer and her mother was a third-grade teacher’s assistant in public schools. Her grandfather, Thomas Devenish, was a Manhattan antique dealer, part of “Devenish and Company”. He was born in England to vaudevillian parents and immigrated to the United States with his family in 1947. Wallace is also of Greek descent. 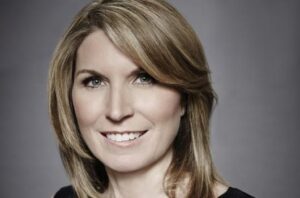 Wallace was married to Mark Wallace. Mark Wallace is an American businessman, former diplomat, and lawyer. The couple tied the knot in 2005. The couple welcomed their first child, a son, Liam Wallace, in 2012. In February 2013, both Nicolle and her husband publicly supported the legalization of same-sex marriage in an amicus curiae brief submitted to the U.S. Supreme Court.

Unfortunately, the couple divorced in 2019. After the divorce, Nicolle is reported to be dating Michael S. Schmidt, a two-time Pulitzer Prize-winning American journalist, author, and correspondent for The New York Times in Washington, D.C.

Wallace has an estimated net worth of $3 million.

On September 14, 1014, Wallace created her debut as a co-host on the premiere of the series’ 18th season. She would have joined The View as a new co-host alongside beginner Rosie Perez on September 3, 2014. After exiting The View, she joined NBC News and its cable network MSNBC as a political pundit.

She is also a regular supporter and guest host on MSNBC programs The 11th Hour with Brian Williams and Morning Joe as well as on NBC’s Today Show. Wallace served as an analyst for MSNBC’s live scope of election results, which was anchored by Chris Matthews in November 2026 and Brian Williams, and Rachel Maddow. She has been the anchor of the afternoon news and opinion program Deadline: White House on MSNBC since May 9, 2017.

Wallace operated as the White House Communications Director during the presidency of George W. Bush and in his 2004 re-election crusade. She also acted as a senior consultant for John McCain’s 2008 presidential campaign. However, she is the author of the current political books Eighteen Acres, Madam President, and It’s Classified.