Nicholas Scott Lachey a native of Kentucky, is an American actor, singer, and television host. He came into prominence for being the lead singer of the boyband 98 Degrees. He has appeared in the reality series Newlyweds: Nick and Jessica alongside his ex-wife Jessica Simpson.

As a solo artist, he has released four albums; SoulO, What’s Left of Me, A Father’s Lullaby, and Soundtrack of My Life. The singer won the fifth season of The Masked Singer.

Lachey stands at an estimated height of 5 feet 9 inches and weighs about 76 kg. He has black hair and blue eyes. Further details about his body measurements will be updated soon.

Lachey was born and raised in Harlan, Kentucky. His parents are John Lachey and Cathalyn Lachey. He grew up alongside his brother Drew Lachey whose also an actor and singer. His maternal grandfather is Robert James Fopma. He was of Dutch descent.

Nick is married to actress and tv personality Vanessa Minnillo. They started dating in 2006 after she starred in his music video for the song “What’s Left of Me”. They got engaged in November 2010. Their wedding took place on July 15, 2011, on Sir Richard Branson’s private Necker Island in the British Virgin Islands. They have been blessed with three children.

Nick was previously married to singer Jessica Simpson. They met through a manager they shared. They started dating in January 1999. In April 2001, they broke up and got back together five months later. Nick and Jessica got engaged in February 2002. They tied the knot on October 26, 2002. The couple divorced on June 30, 2006. 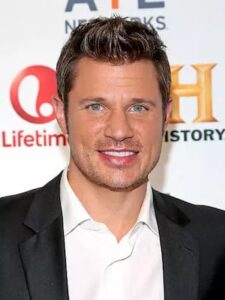 Lachey competed and won season five of The Masked Singer. He performed under the name Piglet. Nick started his singing career at Kings Island in the mid-1990s. He sang in a group along with his friend Justin Jeffre. Nick was part of the boyband 98 Degrees. His brother Drew, Justin Jeffre, and Jeff Timmons were also members of the band.

In 2003, Nick and his ex-wife Jessica Simpson appeared in their own reality tv show Newlyweds: Nick and Jessica. They also starred in the tv special The Nick and Jessica Variety Hour in 2004. Nick released his solo album SouLo in 2003.

His other album What’s Left of Me was released on May 9, 2006. It peaked at number two on the Billboard 200 and was certified Gold. Nick starred in the tv series One Tree Hill as a singer at Red Bedroom Productions. In 2009, Nick produced the musical reality show Taking the Stage.

Lachey was the host of the singing competition The Sing-Off. He also hosted Big Morning Buzz Live. He also participated in the 25th season of Dancing with the Stars. His dancing partner was Peta Murgatroyd. The pair was eliminated in ninth place.

Lachey alongside his wife Vanessa is the host of the new Netflix reality tv show The Ultimatum: Marry or Move on. It premiered on April 6, 2022. The show features six couples. Each couple has a partner that is ready for marriage and one that is not. They are, therefore, given an ultimatum to either get married or break up.

Lachey has an estimated net worth of $25 million.