A native of Jacksonville, Florida, United States, Ned Fulmer is a Partner and Executive Producer at 2nd Try, LLC.

However, he co-created 2nd Try’s flagship brand “The Try Guys,” which has rapidly accrued over 3M subscribers in 6 weeks and has over 1.5 billion lifetime video views. Prior to founding 2nd Try, Fulmer was an early BuzzFeed video staffer.

Fulmer studied chemistry at Yale University and lives with his wife in Los Angeles. 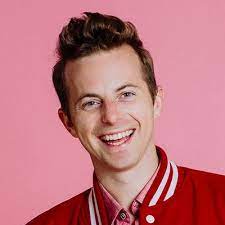 Fulmer was born and raised in Jacksonville, Florida, the United States by his loving and devoted parents.

Fulmer is presently married to Ariel Fulmer and has a young son named Wesley, who was born in April 2018, and another son named Finley, born in November 2020. He also has a dog named Bean.

Fulmer has an estimated net worth of $10 million.

Fulmer has a YouTube channel Try Guy with his other buddies Zach Kornfeld, Keith Habersberger, and Eugene Lee Yang.

Before beginning their channel Try Guy, Fulmer along with his fellow members used to work in Buzzfeed in 2013. After working for over three years in Buzzfeed, the gang left the production on June 16, 2018, and started their own channel.

Fulmer published a book named ‘The Hidden Power of F*cking Up’ on Jun 18, 2019, with other Try Guy members. The book is about a self-improving guide where the boys have told that the path to success leads to many failures, embarrassing, and humiliating mistakes.

In 2016, Fulmer won his first awards The Streamy Awards with the other members of Try Guy for Best Non-Fiction or Reality Series. Then after two years, he won another same award for Audience Choice Best Show of the Year.