Natasha Bianca Lyonne Braunstein a native of New York, is an American actress, director, writer, and producer. She is best recognized for her role as Nicky Nichols on the Netflix comedy-drama series Orange Is the New Black. This role earned her a nomination for the Primetime Emmy Award for Outstanding Guest Actress.

She is also known for starring in the Netflix series Russian Doll as Nadia Vulvokov. Lyonne has appeared in various films like; Dennis the Menace, Everyone Says I Love You, Slums of Beverly Hills, Scary Movie 2; The Grey Zone; Kate & Leopold, and Party Monster.

Lyonne was born in New York City. She was born to her parents Ivette Buchinger and Aaron Braunstein. Her father was a boxing promoter, race car driver, and radio host. Natasha was raised Orthodox since her parents were from Orthodox Jewish families. Lyonne and her parents moved to Israel. They lived there for one year and a half. Lyonne and her older brother Adam moved back to America with their mother and they divorced.

Lyonne appears to be single at the moment. She has also never been married before. However, she was in a relationship with Saturday Night Live alumnus Fred Armisen. She has been in previous relationships with Adam Goldberg and Edward Furlong. 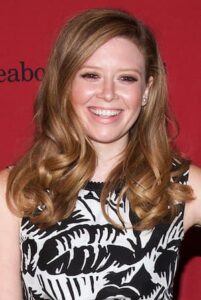 In 1999, Natasha starred in the film series American Pie. This was the first film to premiere and was released by Universal Pictures. The second film was released in 2001 and the third American Wedding was released in 2003. The fourth film American Reunion premiered in 2012. Natasha reprised her role in the other two sequels.

Natasha provided her voice for the role of Suzette, a motel pillow in the adult animated sitcom Big Mouth. The show premiered on Netflix on September 29, 2017. In addition, Natasha has voiced various characters on The Simpsons.

Natasha has also appeared in the series; Grounded for Life, Weeds, New Girl, Will & Grace, and Law & Order: Special Victims Unit. She voiced the character of Smoky Quartz on the Cartoon Network show Steven Universe.

Natasha played the role of Polly in the 1993 American family comedy film Dennis the Menace. She started her career at the young age of six when she was cast as Opal on Pee-wee’s Playhouse. At 16, she was cast in the 1996 film Everyone Says I Love You.

Natasha stars in the American comedy-drama television series as Nadia Vulvokov. Her character is a software engineer. She keeps reliving her 36th birthday party and repeatedly dies and the process begins again. The series premiered on February 1, 2019 on Netflix. Natasha is also the creator of the show alongside Leslye Headland, and Amy Poehler.

Lyonne has an estimated net worth of $5 million.