A native of Flint, Michigan, United States, Mona Haydar is a famous American chaplain, activist, rapper, and poet. Her EP is Barbarian, and she is best known for her viral song “Hijabi,” a protest song.

Haydar stands at the height of 5 feet 6 inches tall. Her weight is publicly not mentioned. We will update this section when information is available.

Haydar acquired her Bachelor of Arts from the University of Michigan-Flint in English literature. She obtained her master’s degree in Christian Ethics from the Union Theological Seminary in the City of New York. She did her fieldwork at New York University and worked as a chaplain at NYU then.

Haydar was born and raised in Flint, Michigan, alongside her seven siblings by parents. Her parents immigrated to the United States of America in 1971. She has not disclosed the identity of her parents publicly. 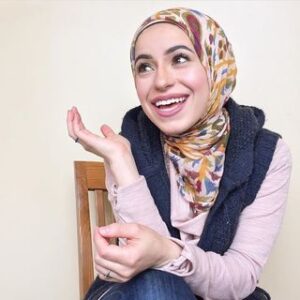 At 14 years old, she started performing poetry shows downtown and spoken word poetry in Flint at open mics. There she developed her act and was taught to use poetry as a way to tell stories she felt were largely neglected by the mainstream media.

Haydar is happily married to her husband named Sebastian Robins, who is a teacher and also a writer. The partners are celebrities of the PBS series The Great Muslim American Road Trip. They are also parents to two sons.

Haydar has an estimated net worth of $1.5 Million.

Haydar is a celebrity in the PBS series, The Great Muslim American Road Trip. She stars alongside her husband Sebastian. The show follows Haydar and her husband Sebastian Robins ” as they explore America’s ‘Mother Road’ and its surrounding Muslim communities on a 2,500-mile drive from Chicago to Los Angeles”

Haydar is an activist, Chaplain, poet, and rapper. She released her EP titled Barbarian in 2017. Haydar’s song Hijabi (Wrap My Hijab), a rally song, went viral. Billboard named Hijabi one of the “Top 25 Feminist Anthems” and also one of “The 20 Best Protest Songs of 2017” Other songs from her Barbarian EP include “American,” “Barbarian,” and “Dog”

Moreover, she has emerged on several TV shows. She emerged on National Geographic’s America Inside Out. Haydar and her husband feature in The Secret Life of Muslims, an Emmy-nominated series. In addition, she stars in the PBS series, The Great Muslim American Road Trip, alongside her husband Sebastian.