Michelle Alegria is an American journalist currently working as a traffic reporter for Fox 32 in Chicago. She joined Fox 32 news channel in January 2018.

Aside from her career as a journalist, Alegria is also a great actress. She has had recurring roles on several TV shows including; How to get away with murder, Castle, and Grey’s Anatomy.

Alegria has managed to keep her personal life away from the limelight hence information about her age and when she was born is still not available. 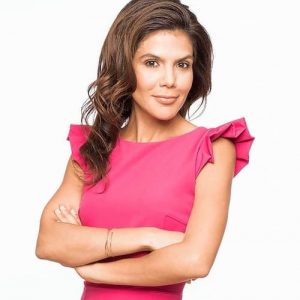 Alegria was raised in Melrose Park, Illinois. Her parents were immigrants from Mexico who settled in America. Alegria is very discrete when it comes to her family life, she prefers to keep things personal hence further information about her parents.  not available.

Alegria went to Trinity High School in River Forest, Illinois where she received her high school education. After graduating from high school, she enrolled at Columbia College Chicago where she graduated with a degree in broadcast journalism. Alegria learned her acting skills from Baron Brown Acting Studio.

Alegria is currently working as a traffic reporter at Fox 32 in Chicago, Illinois. She joined Fox 32 back in 2018 and has been serving in that position ever since. Alegria began her journalism career in Roswell, New Mexico working as a reporter for KOBR-TV. She later moved to KTSM-Tv in El Paso, Texas as a weekend news anchor and general assignment reporter.

Alegria later moved to Chicago taking up a job as a general assignment reporter at CLTV News. In 2000, she started working as a television host for ABC-7’s top-rated magazine show “190 North”. She served in this position for 10 years. During her time at ABC 7, Alegria co-hosted several shows including the annual New Year’s Eve Show, “Countdown Chicago”.

Aside from being a news anchor and reporter, Alegria is also a great actor. She has played several roles in various television shows including, Greys Anatomy, Castle, How to Get Away With Murder, and The Bling Ring. She made an appearance in the 2015 short film. In 2013, she appeared as a weather girl on Jimmy Kimmel Live.

Throughout her career, she has earned several Emmy awards.

Alegria was once married but is now divorced. She has not disclosed any information about her ex-husband. This information will be updated as soon as it’s available. She is a mother to three children, two daughters Fiona, and Sofia, and a son Cj. The family has a pet dog and cat. The family resides in Chicago.

Alegria’s net worth is estimated to be in the range of $1 million – $5 million. She has earned her wealth from her long successful journalism career and acting career.