Matt Cornett is an American actor better known for his character as E.J Caswell on Disney+ series High School Musical: The Musical: The series. His breakthrough role was as Zach Barnes in the show Bella and the Bulldogs. He played this role for 6 episodes which opened more acting opportunities for him.

Cornett was born on October 6, 1998 in Rogers, Arkansas, United States. The 22-year-old celebrates his birthday on the 6th of October every year surrounded by close friends and family.

Cornett stands at a height of 6 feet or 1.83 meters. From his pictures, his height goes well with his body weight. However, details about his body measurements are still not available. He has dark brown hair paired well with his Hazel-colored eyes. 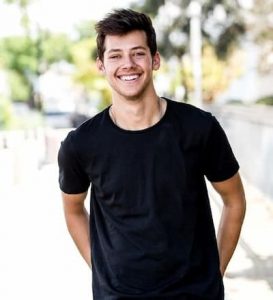 Cornett was born and raised in Rogers, Arkansas. His father’s name is Art Cornett and his mother’s name is Rhonda Cornett. He was raised alongside his siblings a brother and sister. Growing up, Cornet always wanted to be an actor and was lucky his parents supported his dreams.

Cornett has always wanted to become an actor. He moved from his hometown Rogers, Arkansas to Los Angeles to pursue his dream. His most noticeable work was when he played the recurring role of Zach Barnes on Nickelodeon’s Bella and the Bulldogs.

Playing this role earned him the 2016 Young Artist Award for Best Performance in a TV series. It also opened other acting opportunities. He went ahead to feature in several movies and TV shows including Life in Pieces, Game Shakers, and Criminal Minds.

Cornett is currently dating his girlfriend Brookelynn Elizabeth. The two have been in a long-term relationship. Brookelynn is a model and aspiring actress. The two love birds love sharing their photos on their social media platforms showcasing their love towards each other.

Cornett has an estimated net worth of $1 million. His main source of income comes from his career as an actor. Cornett has played a number of roles on various TV shows including Life in Pieces as Ryan, Bella and the Bulldogs as Zack Barnes, and Criminal Minds as Austin Settergren.