A native of, Addis Ababa, Ethiopia Marcus Samuelsson is an Ethiopian-born Swedish-American celebrity chef, restaurateur, and television personality. He is the leader chef of Red Rooster in Harlem, New York.

After Samuelsson became curious about cooking through his maternal grandmother in Sweden, he studied at the Culinary Institute in Göteborg (Gothenburg) where he was brought up. He apprenticed in Switzerland and Austria and then came to the United States in 1994 as a trainee at Restaurant Aquavit.

At the age of three, Samuelsson lost his biological mother to the tuberculosis epidemic in Ethiopia at the time. His father, who still lives in Marcus’ birthplace – an Ethiopian village – is an Orthodox priest from the Tewahedo Church. He was separated from his family due to the turmoil of the civil war in Ethiopia in 1974. 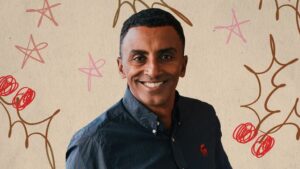 Samuelsson’s real name is Kassahun Tsegie. Changed after he was adopted by Ann Marie and Lennart Samuelsson. Her older sister was also adopted by the same white couple. Ann is a housewife while Lennart is a geologist. The duo who lived in Gothenburg, Sweden has another adopted daughter, Anna Samuelsson.

Samuelsson married Maya Haile, a model, in 2009. Maya was born in Ethiopia and raised in the Netherlands. Marcus and Maya had a destination wedding in Ethiopia and a large number of Maya’s family members attended the ceremony.

They enjoyed the rich African culture of food and other ceremonial treats. The pair lives with their son in Harlem, New York, where two of Samuelsson’s twelve restaurants are also based.

Samuelsson has an estimated net worth of $5 million.

Samuelsson has teamed up with Audible for a new seven-part series based on the Red Rooster Cookbook called Our Harlem. In this innovative, fun fusion of storytelling and cooking, you’ll listen and cook along with Chef and his friends as they talk about the rich culture and history of Harlem and enjoy great music.

Samuelsson learned to cook alongside his Swedish grandmother. Samuelsson started as an apprentice at the Swedish restaurant ‘Aquavit’ in New York in 1994 and worked his way up to the executive chef. In just a few months, the restaurant was awarded three stars by ‘The New York Times.’ He was the youngest chef to ever receive a 3-star rating the following year, at the age of 23.

Samuelsson progressed from a wunderkind of Scandinavian cuisine to a culinary explorer who dug deep into his own roots over time. During his visit to Ethiopia, he learned about berbere spice mixes and how to prepare flat, spongy injera bread. He eventually published ‘The Soul of a New Food: A Discovery of the Foods and Flavors of Africa,’ a cookbook about African cuisine.