A native of  Madison, Wisconsin, United States, Liz Cheney is an American politician and attorney who has been the U.S. representative for Wyoming’s at-large congressional district since 2017.

Cheney graduated from McLean High School, where she was a cheerleader. She acquired her Bachelor of Arts degree from Colorado College, her mother’s alma mater, where she wrote her senior thesis, “The Evolution of Presidential War Powers”. Later, she obtained her Juris Doctor from the University of Chicago Law School in 1996. While there, she also took courses in Middle Eastern history at the Oriental Institute. 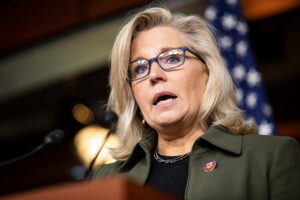 Cheney was born in Madison, Wisconsin, the elder of two daughters of former Vice President Dick Cheney (father) and former Second Lady Lynne Cheney (mother). At the time of her birth, her parents were studying at the University of Wisconsin–Madison. Her younger sister, Mary Cheney, was also born in Madison.

Her relationship with her younger sister, Mary Cheney, publicly suffered after Liz stated in her 2014 Senate campaign that she does not support same-sex marriage.

Cheney is happily married to Philip Perry. They married in 1993 in Wyoming and together they are blessed with five kids’ three daughters, Grace, Kate, and Elizabeth Perry and two sons called Philip and Richard Perry.

Philip is an American attorney and was a political appointee in the administration of George Bush. He graduated with a Bachelor of Arts degree in English from Colorado College in 1986. Cheney’s husband earned a Juris Doctor degree from Cornell Law School in 1990.

Cheney has an estimated net worth of $7 million.

Cheney supported the impeachment of President Trump following the 2021 storming of the Capitol on January 6. Congressman Jim Jordan (R-OH) called for her removal from Republican Party leadership. In 2013, she announced her opposition to same-sex marriage.

Cheney won 21 of 23 counties, losing Albany and Teton Counties to Greg Hunter. On November 14, Cheney was elected by the Republican membership as the Chair of the House Republican Conference for the 116th Congress.

On November 6, 2018, general election, Cheney was re-elected as Wyoming’s sole member of the House of Representatives.

In 2009, Cheney gave the keynote address at a dinner hosted by the Center for Security Policy, a conspiracy-oriented SPLC-designated hate group led by Frank Gaffney.

Cheney is the House Republican Conference Chair, the third-highest position in GOP House leadership. She has been politically active on behalf of the Republican Party and is a co-founder of Keep America Safe, a nonprofit organization concerned with national security issues.

Cheney was a candidate for the 2014 election to the United States Senate in Wyoming, challenging the three-term incumbent Mike Enzi, before withdrawing from the race. In the House of Representatives, she holds the seat that was held by her father from 1979 to 1989. She is known for her hawkish foreign policy views.