A native of New Zealand, Alice Lynne “Lindy” Chamberlain-Creighton is an Australian woman who was wrongfully convicted for murdering her 2-month-old baby Azaria Chamberlain. She was accused of the crime in 1980 when she went camping together with her family at Uluru. Lindy claimed and maintained that it was a Dingo that took her daughter Azaria. Her conviction took place on October 29, 1982.

The 73-year-old stands at an average height. however, this information is currently not documented and will be updated as soon as it is available. 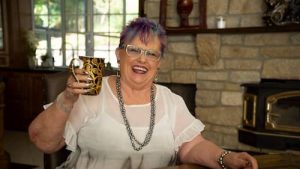 Lindy was born in Whakatāne, New Zealand to Avis and Cliff Murchison. Her together wit her family moved to Australia in 1969. Her family was part of the Seventh-day Adventist Church. Chamberlain was nicknamed Lindy at a young age.

Lindy’s first marrige was to her ex-husband an Adventist pastor, the New Zealand-born Michael Chamberlain. The two tied the knot on 18 November 1969. After getting married they resided in Tasmania and later moved to Mount Isa in Northern Queensland after 5 years.

The two gave birth to four children two sons and two daughter including Azaria Chamberlain their first daughter born on 11 June 1980. Their first son Aidan was born in 1973, second son Reagan born in 1976 and their fourth child Kahlia was born 1982.

Lindy and Michael divorced in 1991. She later remarried on 20 December 1992 to Rick Creighton a publisher. They reside in Australia.

Michael Chamberlain was also convicted for the death of their daughter Azaria for being an accessory to her murder.

Lindy Chamberlain The Disappearence of Azaria

In August 1980 Lindy together with her family including 2 months old Azaria went on a camping trip to Uluru. They arrived on the 16th and on 17th of August, Lindy reported that her child had been taken by a dingo from their tent. This led to a big search and even though she wasnt found, her jumpsuit was discovered about 4 kilimeters from the tent after a week.

Their was bloodstain about the neck of the jumpsuit. Lindy and her husband claimed and maintained that a Dingo took their baby. In support of their claims, Uluru chief ranger Derek Roff had written to the government about the increase of dingos in the area.

The first inquest was held in December 1980 and January 1981 by Alice Springs magistrate and coroner Dennis Barritt. The second inquest was issued by the Supreme Court and held in December 1981. With evidence provided, Lindy was charged with Azaria’s murder and Michael charged with being an accessory to the murder. The two were found guilty of the crime on 29 October 1982.

After new evidence was found on 2 February 1986, Chamberlain was released from prison. Azaria’s matinee jacket was found partially buried close to a dingo lair near Uluru. The discovery of the jacket was in support of Chamberlains defence case. Her death sentence was remitted and her together with her husband were officially pardoned in 1987. Lindy was compensated by the Australian government $ 1.3 million.

In 2012, a new inquest was held after the chamberlains pushed for a further investigation into the death of the daughter Azaria. They wanted their daughter’s death to be concluded as being caused by a dingo and without human ‘interference. Further evidence detailed dingo attacks on infants and young children which helped with the new investigation. On 12th of June 2012, it was finally ruled that a dingo took and caused the death of Azaria. The family was then provided an amended death certificate.

In 1983, a movie was released titled Who Killed Baby Azaria?. The movie aired on Network Ten. Another film Evil Angels starring Merryl Steep was released in 1988. She earned an Academy Award nomination for Best Actress in 1989 for her role. A mini-series Through My Eyes: The Lindy Chamberlain Story premiered in 2004 starring Miranda Otto. In addition, Moya Henderson wrote an opera titled Lindy a libretto by Judith Rodriguez.

Lindy was compensated by the Australian government $ 1.3 million. This came after new evidence found supported the Chamberlains defence case which led to her release from prison. Her death sentence was remitted and her together with her husband were officially pardoned in 1987

Chamberlain has an estimated net worth of $11 million. She has also published a book titled Through My Eyes: an autobiography in 1990.