Lani Randol is an American model, actress, blogger, social media influencer, and tik tok star better known for appearing on the game show Deal or No Deal. In addition, she also has a YouTube channel with more than 40 thousand subscribers.

Her beautiful nature and bold looks have earned her several modeling gigs for popular brands such as Ripley Clothing, Neiman Marcus, Target, and Pantene.

Randol stands at an average height of 5 feet 9 inches or 175 meters. Her height goes well with her body weight of 60kgs. She has light brown hair and beautiful blue eyes. 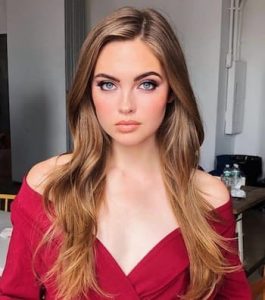 Randol was born and raised in Lynchburg, Virginia, United States. She was born as Lani Baker to her father James Baker a business man and her mother Tara Backer. Randol has two siblings Maverick Baker and Cash Baker. Both her siblings are Tik Tok stars. Randol is of White ethnicity and holds an American Nationality.

Randol has always wanted to become a model ever since she was young. She is happy that she is now living her dream. Randol is a model, actress, and social media influencer with a massive following. As a model, she has landed several modeling gigs for popular brands like Neiman Marcus, Caycee Black, Peru, Target, and Pantene.

In 2018, she gained popularity after appearing as a briefcase model in the NBC TV reality show Deal or No Deal. Randol is signed with LA Models, the Kim Dawson Agency, and Elite Miami. As a blogger, Randol regularly posts on her Blog The Model Diet. Randol started sharing her photos on her social media accounts back in 2015.

Randol and her husband Garret Randol officially got married on the 4th of August 2019 in Tulsa. The two had dated for months before Garret proposed in July 2019. Randol and Garret grew up together in the same neighborhood.

They started a romantic relationship in the 2018 Christmas holidays. The two love birds celebrated their honeymoon in South Africa. Prior to her relationship with Garret, Randol was dating Instagram star, Nate Norrell.

Randol has an estimated net worth of $500, 000. Her main source of income is from her career as a model and social media star.