A native of Virginia, Kia Proctor is an American model and stripper who rose to fame due to her relationship with Cam Newton, an American Football quarterback with the Carolina Panthers.

Prior to becoming a model, Proctor was a stripper who went by the name Hazel.

Proctor is the daughter of Jerome Proctor and Ann Marie. Her parents are natives of Virginia and have mixed ethnicities. Not much is known about her family. She has to keep her family away from the limelight. 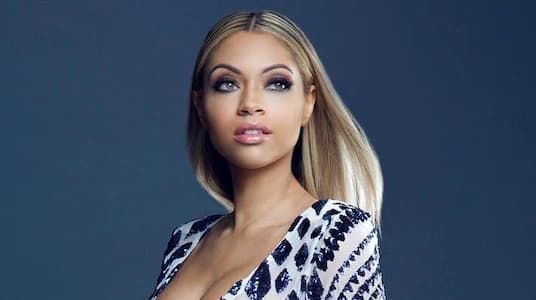 Proctor was in a long-term relationship with Cam Newton before eventually breaking up. Cam is an American football quarterback for the Carolina Panthers of the National Football League (NFL).

She and Cam confirmed their relationship on 30 December 2015 through Twitter. However, they had made their first public appearance happened in 2013 at the Kentucky Derby. They were later seen together at the NFL Honors in 2014.

Proctor and Cam Newton welcomed their first child, a son on 24 December 2015, and named him Chosen Sebastian. Cam made the announcement on his Twitter account after a week stating ‘My long-time girlfriend and I were extremely blessed to have a son last week’.

Later on 3 February 2017, Kia and Cam welcomed their second child, a daughter, whom they named Sovereign-Dior Campbell.

Their third child, a son named Amidas Swain, was born on 6 July 2018. Kia was the first one to post on social media about the big news.

The couple later welcomed their fourth child in 2019.  Kia confirmed the news in the beginning of May 2019 via Instagram. Proctor also has a daughter from a previous relationship but has kept her name from the public.

Proctor began her career as a dancer and stripper in strip clubs. At that time she was using the name Hazel, and she became renowned in various clubs such as the Washington Stadium Club.

Kia later moved to Atlanta where she began her job as a party host, and also became a full-time model. She stopped working as a stripper after she began dating Cam Newton, and became a model instead.

She engaged in a number of gigs before choosing to take care of her family and forgoing her career.

She has an estimated net worth of $1 million.