Kevin McCarthy is an American journalist currently working as an entertainment reporter for Fox 5 Morning News in Washington Dc. He mainly reviews movies and reports on entertainment and celebrity news.

McCarthy joined Fox 5 back in 2007. He is also a contributor to Fox News Channel’s Fox and Friends. Prior to his current position, he reviewed movies for The Sports Junkies at 106.7 WJFK-FM. He joined 106.7 FM on the 18th November 2005.

Information about McCarthy’s body measurements is still disclosed. It will be updated as soon as it is available. 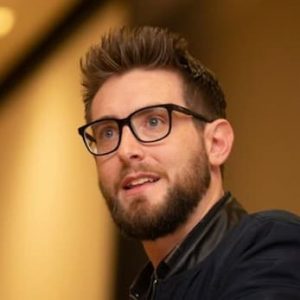 Information about his parents and siblings is still disclosed. It seems like McCarthy prefers to keep his family away from the limelight. However, this information will be updated as soon as it’s available.

McCarthy attended George Mason University where he majored in communications. He also took film classes and doing movie reviews on his AOL Instant Messenger. McCarthy was also working as an intern at 106.7 WJFK-FM.

McCarthy is happily married to his wife Lauren Veneziani who is also a film critic. The two dated for a long time before they finally got engaged on November 2, 2015. McCarthy found the perfect way to propose to his then-girlfriend by quoting his favorite famous movies.

McCarthy currently works as a film critic for FOX 5, Fox & Friends (Fox News nationally), The Sports Junkies, and FOX 29 (Philly). He has always been a movie enthusiast since he was a child. His favorite movie of all time was Terminator 2: Judgement Day. Aside from his love for films he was also fascinated by special effects. He knew from a young age that he wanted his career involved with films.

McCarthy started his career while still at George Mason University. He did movie reviews on his AOL Instant Messenger while working as an intern at 106.7 WJFK-FM in the promotions department. On the 18th of November 2005, McCarthy was given a chance by The Sports junkies on 106.7 WJFK-FM to air his movie reviews.

He was excited about having the chance to talk about the love he has for films. In 2007, he moved to Fox 5 as an entertainment reporter and movie critic. Working for Fox 5 gave him the chance to meet and interview some of his childhood movie heroes.

Throughout his career, he has been nominated for two National Entertainment Journalism Awards. In 2012, he got the chance to direct a short film for Steven Spielberg. This was after he interviewed him for  “War Horse” and “The Adventures of Tin Tin”. His favorite actor is Gary Oldman and his favorite director is Quentin Tarantino.

McCarthy is one of the best entertainment journalists at Fox 5 thus, he earns an annual salary ranging between $20, 000 and $100, 000. There’s no exact information about his monthly and annual salary. This information will be updated as soon as it is available.

Being one of the best entertainment journalists at Fox 5, McCarthy’s net worth is estimated to be less or more than $1, 000, 000. He has earned all his wealth from his successful career as an entertainment reporter.