A native of Belfast, United Kingdom, Sir Kenneth Charles Branagh is a British actor and filmmaker. Branagh trained at the Royal Academy of Dramatic Art in London and has served as its president since 2015. He has won an Academy Award, four BAFTAs, two Emmy Awards, and a Golden Globe Award.

Branagh was educated at Whiteknights Primary School and Meadway School, a local comprehensive in Tilehurst, where he appeared in school productions such as Toad of Toad Hall and Oh, and What a Lovely War. He obtained received pronunciation to avoid bullying at school. He then attended the amateur Reading Cine & Video Society as a member and was a keen member of Progress Theatre of which he is presently the patron.

After dissatisfying A-level results in English, History, and Sociology, Branagh went on to train at the Royal Academy of Dramatic Art in London. In 1980, the Principal of RADA, Hugh Cruttwell, asked Branagh to perform a soliloquy from Hamlet for Queen Elizabeth II, during one of her visits to the arcade. 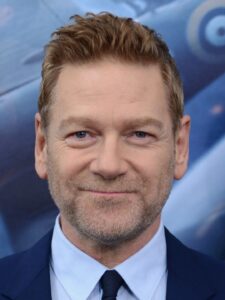 Branagh was born in the middle of three children in Belfast as the son of William Branagh(father), a plumber and joiner who ran a company that specialized in fitting partitions and suspended ceilings for working-class Protestant, and Frances Harper (mother). He lived in the Tigers Bay area of the city. At the age of nine, he moved with his family to Reading, Berkshire, England, to escape the Troubles. He was raised together with her sister, Joyce Branagh, and his brother, William Branagh Jr.

Branagh is married to Lindsay Brunnock, a film art director. He met during the shooting of Shackleton. He has stated he became “much more religious” after listening to Laurence Olivier’s dramatic reading of the Bible every morning, in preparation for his role as Olivier in My Week With Marilyn.

Previously, Branagh was married to actress Emma Thompson. They appeared together in Fortunes of War, Look Back in Anger, Henry V, Much Ado About Nothing, Dead Again, and Peter’s Friends. More lately, they both appeared in The Boat That Rocked, and the Harry Potter series, though with no shared scenes in either. In their marriage, and while directing and co-starring with Helena Bonham Carter in Mary Shelley’s Frankenstein, he started an affair with Bonham Carter. After Thompson divorced him, he and Bonham Carter were in a well-publicized relationship until 1999.

Branagh has an estimated net worth of $60 million.