Katherine Bear Tur a native of California is an American broadcast journalist and author. She is currently working for MSNBC Live. She has previously reported for NBC’s Early Today, Today, NBC Nightly News, Meet the Press, WNBC-TV, MSNBC, and The Weather Channel.

Katy stands at an estimated height of 5 feet 2 inches and weighs about 59 Kg. She has blonde hair and blue eyes. Further details about her body measurements will be updated.

Tur was born and raised in Los Angeles, California. She was born to her parents Zoey Tur and Marika Gerrad. Both her parents are journalists. Tur has one sibling called James Tur. She went to Brentwood School and then enrolled at the University of California, Santa Barbara. She graduated with a Bachelor of Arts in philosophy.

Katy is happily married to her husband Tony Dokoupil a broadcast journalist and correspondent for CBS News. They tied the knot on October 27, 2017, in Utah. They share two children. Their first child, a son was born on April 13, 2019, and their daughter was born on May 13, 2021. Katy is step-mom to Tony’s two children from his first marriage. 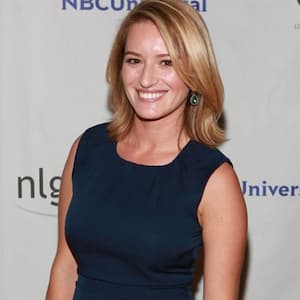 Tur and her husband Tony Dokoupil have two children; a son born on April 13, 2019, and a daughter born on May 13, 2021. Tony has two other children from his first marriage.

Tur worked for KTLA as a reporter. She later worked for HD News/Cablevision, News 12 Brooklyn, WPIX-TV, and Fox 5 New York. She joined The Weather Channel as a storm chaser for the VORTEX2 team. Tur joined NBC’s WNBC-TV in New York City in 2009.

At NBC, she won the AP’s Best Spot News Award for reporting on the March 2008 crane collapse on the Upper East Side of Manhattan. Some of her major stories include; the death of Cory Monteith, a motorcycle attack on an SUV, and the search for Malaysia Airlines Flight 370.

Tur was a reporter for both NBC and MSNBC during the Donald Trump presidential campaign. Tur received the Walter Cronkite Award for Excellence in Journalism in 2017. Katy is the author of “Unbelievable: My Front-Row Seat to the Craziest Campaign in American History” published in 2017.

Tur reportedly makes an annual salary of $1 million. She is one of the top journalists currently working for MSNBC, therefore, it is obvious that she would make a decent salary.