A native of  Goshen, Indiana, Kate Bolduan is an American broadcast journalist working as the anchor of At This Hour with Kate Bolduan on CNN.

Bolduan also anchors the State of America with Kate Bolduan on CNN International. She previously co-anchored for the CNN program New Day and The Situation Room. She has also served as a congressional correspondent based in Washington, D.C. as well as a general assignment correspondent for CNN.

Bolduan is the daughter of Dr. Jeffrey Bolduan and Nadine Bolduan. Her mother is a nurse. She has three siblings; all girls. She is the third born. As of now, there is no more information available about her family.

As earlier mentioned, Kate has three sisters. There have been rumors that she has a twin sister but it is not clear whether these rumors are true or not. 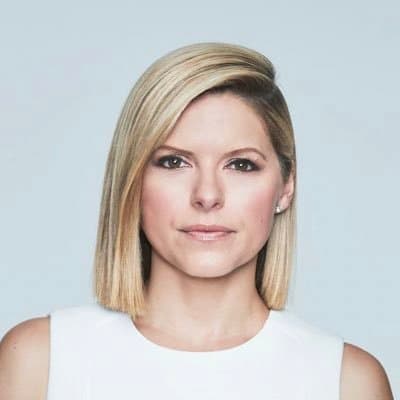 Bolduan is married to Michael David Gershenson. She and Michael got married in May 2010. The couple has two children together; a daughter, Eve Gershenson, who was born in 2014, and another one named Delphine Esther Gershenson born in December 2017.

Bolduan began working as a national correspondent for CNN Newsource in 2007. She provided breaking news coverage and feature reports for a large number of CNN Newsource affiliates.

The Situation Room with Wolf Blitzer

Bolduan was previously a co-anchor of The Situation Room with Wolf Blitzer before moving to New York. Here she provided current events, breaking news, political headlines, and reports within lively discussions during the two-hour program.

New Day is a weekday morning television show on CNN that premiered on June 17, 2013, and airs from 6:00 a.m. to 9:00 a.m. ET, originating from CNN’s Time Warner Center studios in New York City. The show replaced Starting Point, formerly anchored by Soledad O’Brien, which had aired since January 2, 2012.

At This Hour with Kate Bolduan

Bolduan joined CNN’s new morning show, At This Hour, which premièred on January 26, 2015, alongside John Berman. The show covers various news stories of the day.

The show airs weekdays from 11 a.m. to noon ET and is broadcast live from CNN’s New York Studios in Manhattan. Berman, on February 6, 2017, moved to 9 a.m. to co-host CNN Newsroom and Kate took over as the sole host of At This Hour.

State of America with Kate Bolduan

Bolduan was named anchor of State of America with Kate Bolduan, a CNN International program that covered the 2016 U.S. Presidential campaign for a global audience. After the election, the program was renamed and pivoted to focus on U.S. news and affairs. State of America airs on Fridays at 23:00 CET from CNN’s New York studios in Manhattan.

During the first ten minutes of the show Kate discusses the daily news and after a commercial break, a panel, typically consisting of four journalists and analysts from various backgrounds, discusses current affairs.

Champions for Change is an annual series at CNN where anchors and staff choose a topic and go out of their regular format and it follows the Champions of Change initiative of the Obama White House.

In 2014 Kate made a feature titled Kate Bolduan’s Roots. Kate’s ancestors arrived in America in 1912 and they came from a small town called Chênée in Belgium. Leon Emile Rousselle (Kate’s great-great-grandfather) arrived in the United States aboard the SS Kroonland.

His pregnant wife, Louise Labhaye Rousselle, and his two-year-old daughter traveled to the U.S. aboard the SS Lapland, two months late. The Rousselle’s came from a long line of glass manufacturers. In 2014 Kate traveled to Liège in Belgium to find out about her family history.