Justin Lum is an American award-winning journalist and reporter who joined the FOX 10 team in January of 2019 after reporting for the CBS/NBC affiliated duopoly in Fresno, CA for nearly two years.

Lum has not yet disclosed his exact date, year, or month of birth.

Lum likes to keep his personal life private hence has not yet shared any information about his parents and siblings. 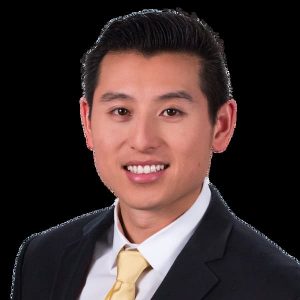 Lum is a married man and has recently welcomed a daughter into the world, Giselle Audrey Lum.

Lum is a graduate of San Francisco State University where he earned a degree in Broadcast Journalism.

In August of 2018, he also posted for multiple station affiliates on Hurricane Lane’s strong alert as it approached the Hawaiian islands.

He began his career in television news as a one-man-band reporter and weekend sports anchor for KEPR in Pasco, Washington, before moving to Fresno. This hybrid position taught him how to constantly pursue his own story ideas and demonstrated the importance of hyper-local news and sports to communities.

Apart from being a reporter Lum also enjoys time behind the scenes as a producer for the Oakland Raiders Silver & Black Productions. In 2015, he won an Emmy for the 30-minute special on Ray Guy’s induction into the Pro Football Hall of Fame together with his team.