A native of Hartford, Connecticut, United States, Julie Banderas is a famous American television news anchor for the Fox News Channel, based in New York City.

However, she later took the professional name, Banderas. She hosted Fox Report Weekend before moving to a weekday anchor role and presently acts as a primary weekday fill-in anchor.

Banderas graduated with a bachelor’s degree from Emerson College. 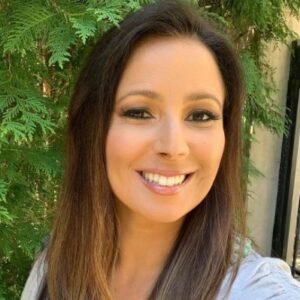 Banderas was born and raised in Hartford, Connecticut, the United States by her parents Fabiola R. Bidwell and Howard D. Bidwell. Her father was a civil engineer and Navy veteran who began his own company called Consolidated Precast, Inc.

He acquired a B.S. in Civil Engineering from Bucknell University and acted on the Republican Town Committee and member of the Zoning Board of Appeals. He was also a charter member in establishing the Farmington Rotary Club. He later died in 2010.

She has a sister known as Melissa Bidwell who is an executive producer for Mariah’s World, I Am Cait, So Cosmo, Keeping Up With Kardashians, and Combate Americas. She also has four half-siblings from his father’s previous marriages, Marybeth (Becky) Bender, Susan Williams, Howard (Bud) Bidwell, and Tracy Bidwell.

Banderas is happily married to her loving husband Andrew  J. Sansone since September 29, 2009. The partners met during a Fox News set. She was asked to host a Habitat for Humanity event which had been put together by Sansone who was on the board of directors. He finally got to ask her out to dinner and they started dating.

Banderas has an estimated net worth of $12 million.

Banderas acts as a national correspondent and news anchor for Fox News Channel based in New York. She joined FNC in 2005 as a general assignment journalist. During her term, she has provided a live range of the 2013 New York City mayoral race, the crash landing of Southwest Flight 345 at LaGuardia Airport (LGA), the inauguration of Pope Francis, and Hurricane Sandy.

She has also reported on several big stories, including Hurricane Dennis in 2005, the disappearance of U.S. student Natalee Holloway who went missing in Aruba in 2005, the legal case of Terri Schiavo from Florida, and the murder of 9-year-old Jessica Lunsford by a registered sex offender.

Prior to joining FNC, she was the weekend anchor at WNYW-TV (FOX 5) in New York, NY, and also performed as an anchor for several local news stations, including WFSB-TV (CBS 3) in Hartford, CT, WHSV-TV (ABC 3) in Harrisonburg, VA and WBRE-TV (NBC 11) in Wilkes-Barre. In 2004, Banderas was awarded the “Outstanding Single Newscast” Emmy award for her coverage of the Republican National Convention.

In June 2006, Banderas earned international media attention for an on-air clash with Shirley Phelps-Roper, former spokeswoman for the Westboro Baptist Church, about which she later stated, “These people should be arrested, and I understand the right to protest, but when you disgrace not only our fallen soldiers but when you disgrace innocent young children, I swear. Lock ’em up. Throw away the key. Give ’em the death penalty. I think it‘s disgusting.”