Julia Garner a native of New York, is an American actress best known for her roles as Ruth Langmore in the Netflix series Ozark, Anna (Sorokin) Delvey in Inventing Anna, and Kimberly Breland in The Americans. She has also appeared in; Maniac, Dirty John, and The Perks of Being a Wallflower.

Garner stands at an estimated height of 5 feet 5 inches (1.65 meters) and weighs about 55 Kgs (121 lbs). On to her body measurements, her waist and hips measure 25 inches and 33 inches respectively. Her hair color is blonde and her eyes are blue.

Julia was born and raised in the Riverdale neighborhood of The Bronx, New York. She was born to her parents Tami Gingold and Thomas Garner. Her mother is a therapist and former Israelite actress and comedian. Her father is a painter and an art teacher hailing from Shaker Heights, Ohio. She was raised alongside her sister Anna Garner who’s an artist. Garner understands Hebrew and is Jewish.

Garner is happily married to her husband Mark Foster. Foster is an American singer, songwriter, and musician. He is the lead vocalist of the indie-pop band Foster the People. The two tied the knot in December 2019 at New York City Hall. 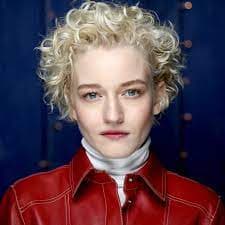 Garner started her acting career in 2010 when she appeared in Sean Durkin’s Martha Marcy May Marlene as Sarah. In 2012 she appeared in David Chase’s film Not Fade Away. Her first starring role was as Rachel McKnight in Electrick Children. In 2014, she co-starred in Sin City: A Dame to Kill For.

In 2015, Garner was cast to play the role of Sage in Grandma. She had a recurring role in the third and sixth seasons of the FX period spy thriller series The Americans. Her most notable roles are as; Ruth Langmore in Ozark, Ellie in Maniac, and Maddy in Modern Love. She was cast in the 2022 thriller film Apartment 7A.

Garner was cast to play the role of Anna (Sorokin) Delvey in the Netflix miniseries Inventing Anna. Her role is based on the real-life story of Anna Delvey a Russian-born German fraudster. The show was created by Shonda Rhimes and is based on Jessica Pressler’s New York article “How Anna Delvey Tricked New York’s Party People”. It premiered on February 11, 2022.