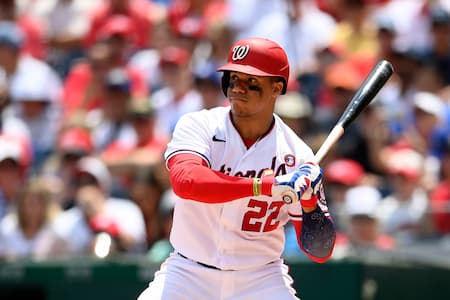 Dominican professional baseball outfielder, Juan Soto, who is signed with the Washington Nationals is rumored to have turned down a 13-year, $350 million contract offer from the team.

Soto signed with the Nationals in 2015 as an international free agent and went ahead to make his MLB debut in 2018. That year, he was the runner-up for the NL Rookie of the Year Award. The following year, Soto was a key part of the Nationals’ first World Series championship and in 2020, he won the National League batting title with a .351 average.

According to ESPN’s Enrique Rojas, Soto was offered the $350 million deal earlier this offseason before the lockout but he turned down the offer. According to Rojas, the contract included no deferred salary.

“Yes, they made me the offer a couple of months ago, before the lockout we have in baseball. But right now, me and my agents think the best option is to go year after year and wait for free agency. My agent, Scott Boras, is in control of that situation,” Soto told Rojas.

Soto and Ted Williams are the only players in MLB history to have led the major leagues in on-base percentage multiple times by age 22. He battled .313/.465/.534 with 29 home runs, 95 RBIs, and 111 runs scored in 2021. Soto is reputable as the most disciplined hitter in baseball by swinging at an MLB-low 15.1% of pitches outside the strike zone. The next closest player is Dodgers infielder Max Muncy.