A Turkish-American native, John Gidding is a designer, television personality, and former fashion model. He initially began his career modeling in 2000 as a graduate student where he performed runway shows for Armani, Gucci, and Hugo Boss before being represented by Wilhelmina Models in New York City.

In 2004 and 2005, Gidding was the spokesmodel for Jhane Barnes which was before he began his design profession. In addition, he has been on the covers of numerous romance novels. Furthermore, he was voted one of Yale’s 50 Most Beautiful People in 1999 by Rumpus Magazine.

He was also voted one of Boston’s 50 Most Eligible Bachelors by The Improper Bostonian in 2002, and one of Atlanta’s 50 Most Beautiful People by Jezebel Magazine. In 2008, he was voted as one of Atlanta Homes Lifestyle’s Emerging Talent: Twenty Under 40. 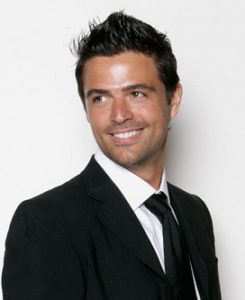 Although John maintains a low profile about his personal life, he disclosed that he was to an American father and a Turkish mother. He has not disclosed their identity nor that of his siblings.

The two love birds met via networking sites and soon began dating. Damian later went down on his knees and proposed to John three months after their first date. The two tied the knot in 2013 shortly after gay marriage became legalized. An year after their wedding, Damian retired from Ballet dancing which he had dedicated 20 years of his time in. In 2016, the couple settled for a divorce just three years after their wedding.

Born and raised in Istanbul, Turkey, John did his early education here. He later moved to the United States for college after attending Leysin American School in Leysin, Switzerland. In 1999, he graduated from Yale University with a BA in architecture. He later attended Havard Graduate School of Design with a Master’s in architecture. While studying at Yale University, he sang a cappella with The Society of Orpheus and Bacchus and Choral music with the Yale Glee Club. Moreover, while at Havard, he sang with the Havard-Radcliffe Collegium Musicum.

Gidding who is an American architect and interior designer is known for being an expert to HGTV’s Curb Appeal show. Previously he aired on Designed to Sell a show on HGTV that aired from 2006 to 2011 when it was canceled.

After working for two years as a designer for Michael Van Valkenburgh Associates, John moved to New York City where he started his own design company called John Gidding Design, Inc. His first television feature was with the ABC Family TV show titled Knock First. In the show, he and three designers took turns making over teenager’s bedrooms.

He was also featured in Designed to Sell which aired from 2006 to 2011 on HGTV, the show was later canceled in early 2011 by HGTV. Knock First is still running in syndication internationally. Gidding is best known as the designer on Curb Appeal: The Block where his team spent $20,000 on improvements to the exterior and landscaping of chosen homeowners.

In 2015, he was one of the expert judges on the Fox TV show Home Free. During the reboot of Trading Spaces, he joined as a cast alongside Paige Davis and Vern Yip. Currently, John is back on HGTV, with a relaunch of the popular franchise, Curb Appeal Xtreme.

Details pertaining to his weight loss are currently unavailable. We are nonetheless keeping tabs on him and will update this information as soon as it has been made publicly available.

John Gidding Net Worth and Salary

Gidding has an estimated net worth of $16 million which he has acquired majorly from his career as a designer as well as a television personality. However, his annual earnings are currently under review and will soon be updated.