Joey Diaz is a Cuban-American standup comedian, actor, and podcast host who was born in Cuba and raised in North Bergen, New Jersey.
Diaz began his standup career in 1991. Joey had roles in the television series My Name Is Earl and the films The Longest Yard and Taxi.

He has since 2012, hosted a podcast, The Church of What’s Happening Now, and he is a regular guest on The Joe Rogan Experience and has even produced an autobiographical documentary.

Diaz is married to Terrie Clark of Nashville, Tennessee. The couple got married on November 25, 2009. 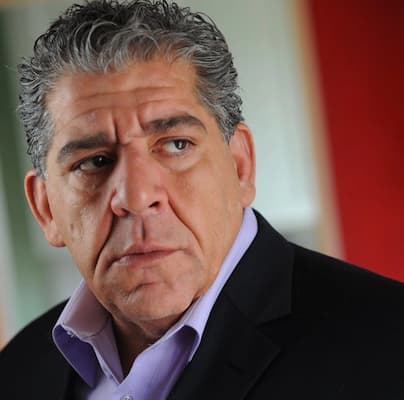 He was previously married to another woman who is the mother of his daughter but he divorced her in 1991, during which he lost a relationship with their daughter.

In 2009, Joey was introduced to comedian Felicia Michaels, who encouraged him to co-host a new comedy podcast, Beauty and Da Beast, which was launched in August 2010.

In one early episode, he recalled a story about setting a prostitute’s wig on fire when he was young. Later the weekend after the podcast aired, more people were turning up at Joey’s stand-up shows. The podcast ended after 113 episodes in November 2012.

Later on September 2, 2012, Joey launched his own audio and video podcast, The Church of What’s Happening Now, which he co-hosts with co-producer Lee Syatt.

Developments in Joey’s life were interrupted in 1988 by a stint in prison, following his arrest for kidnapping and aggravated robbery. During his time in prison, Joey would perform stand-up routines for his fellow inmates during the weekly film screening event when the projector broke.

It took him three more years to try stand-up, despite being often told of his talent, and later called his entry into the line of work as “the last resort” as he had many other jobs in the past.

After he saw the 1988 film Punchline, Joey responded to an advertisement for a $37 stand-up comedy course in the Rocky Mountain Post and developed a blue comedy act. Before doing his first standup routine, Joey worked as a doorman at Wit’s End.

On June 18, 1991, he performed his routine at the Comedy Works in Denver at a show headlined by Matt Woods. Later in 1992, before his opening spot for Troy Baxley in Boulder, he took cocaine before going on stage and had a set that he described as “a disaster” and later since that day, he ceased taking the substance before a performance.

Later in 2012, he supported his Where I Got My Balls From documentary with the release of his stand-up special, It’s Either You or the Priest and it went to number one on the Billboard comedy charts in the UK and Canada, and number one on iTunes.

In the 1998 American sports comedy film co-written and directed by David Zucker, Joey played as Referee.

Joey Diaz How I Met Your Mother

In the American sitcom, How I Met Your Mother, Joey is seen in the background behind Marshall and Ted at the baseball game. He portrayed an angry New Yorker.

Diaz has a net worth of $500 thousand dollars.