A native of  Brooklyn, New York, United States, Jerry Seinfeld is a famous American producer, writer, actor, and stand-up comedian. He is best known for playing a semi-fictionalized version of himself in the sitcom Seinfeld, which he designed and wrote with Larry David.

Seinfeld attended Massapequa High School on Long Island. At the age of 16, he spent time volunteering in Kibbutz Sa’ar in Israel. However, he attended the State University of New York at Oswego, and transferred after his second year to Queens College, City University of New York, whence he graduated with a degree in theater and communications.

Seinfeld was born and raised by her parents in the Brooklyn borough of New York City and raised in Massapequa. He was born to his parents Betty and Kálmán Seinfield. His father was of Hungarian-Jewish descent and died in 1985. Seinfield’s mother was a Jew from Aleppo, Syria but immigrated to Turkey in 1917 with her parents Selim and Salha Hosni. 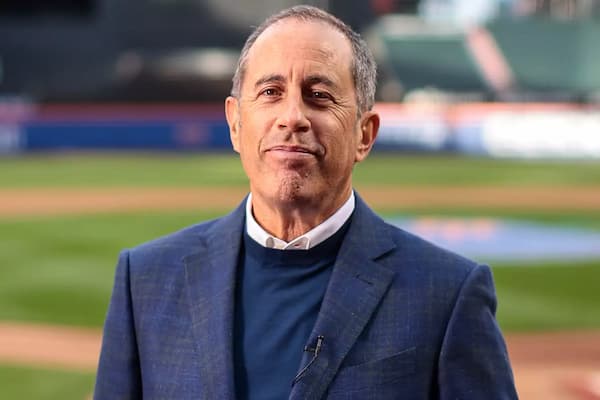 Seinfeld has been married to his loving wife Jessica Sklar for about 22 years since December 25, 1999. she is a philanthropist and an author. They met in August 1998 at a Reebok Sports Club when Jessica was working as a public relations executive for Tommy Hilfiger.

This was just after Jessica had returned from a three-week honeymoon in Italy with her ex-husband Eric Nederlander. Jessica got a divorce from her ex-husband after two months. Jerry and Jessica officially started their relationship. The married couple has three kids; Julian Kal Seinfeld, Sascha Seinfeld,  and Shepherd Kellen Seinfeld.

Seinfeld has an estimated net worth of $950 Million.

As an author, Seinfield has written a book titled SeinLanguage published in 1993. The book is an adaptation of his stand-up material. He published a children’s book titled Halloween in 2002 which was then illustrated by James Bennett. In addition, he has written forewords to the Peanut Butter & Co. Cookbook, Ted L. Nancy’s Letters from a Nut series of books, and Ed Broth’s Stories from a Moron. Seinfield released his latest book Is This Anything? in October 2020.

In 1988, Seinfield and Larry David created the sitcom The Seinfield Chronicles for NBC. The show was renamed Seinfield to avoid confusion with the sitcom The Marshall Chronicles. Jerry played a semi-fictionalized version of himself. The show ran for about 10 years with its last episode airing in 1998. The show also starred Saturday Night Live veteran Julia Louis-Dreyfus. Actors like Michael Richards and Jason Alexander also appeared on the show.

He started his career performing on open-mic nights at Budd Friedman’s Improv Club. He was still studying at Queens College. In 1976, he went on to appear at an open-mic in Catch a Rising Star in New York City. This was followed by an appearance in a Rodney Dangerfield HBO special. He had his first special on September 5, 1987, which lasted for one hour on HBO.

In 1998, he recorded the comedy special called I’m Telling You for the Last Time. He appeared in two commercial webisodes for American Express, titled The Adventures of Seinfeld & Superman in 2004. Seinfield made a cameo appearance on Saturday Night Live on May 13, 2006. He played the role of host Julia Louis-Dreyfus’ assassin. In 2008, he performed in a one-night-only show at the Hammerstein Ballroom in New York City.

Seinfield created the web series titled Comedians in Cars Getting Coffee in 2012. In the series, he would pick up a comedian in a different car on every episode. He would then take them out for coffee and conversation. Seinfield made another appearance on the Saturday Night Live 40th Anniversary Special on February 15, 2015. Seinfield’s first original stand-up special 23 Hours to Kill premiered on Netflix on May 5, 2020.