Jeffrey Marshall Foxworthy a native of Georgia, is an American comedian, actor, writer, producer, television/radio personality, and author. He is best known for his one-liner “You might be a redneck”.

Jeff has released six major-label comedy albums. He starred in his own sitcom called The Jeff Foxworthy Show. In addition, he has hosted the quiz show Are You Smarter Than a 5th Grader? and Syndication.

Foxworthy stands at an estimated height of 5 feet 10 inches of 1.78 meters and weighs about 75 kg.

Jeff was born and raised in Atlanta, Georgia. He was born to his mother Carole Linda and his father Jimmy Abstance Foxworthy. His father was an IBM executive. His grandfather’s name was James Marvin Camp. He was a Hapeville firefighter for over thirty years. Jeff was raised alongside his two younger siblings Jay Foxworthy and Jennifer Foxworthy. 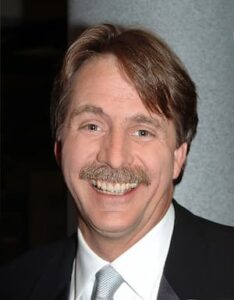 In 2022, a new show starring Foxworthy premiered on Netflix. The Netflix special features Jeff as he looks back to the old good days. He gets to talk about aging, sex education, and stories from the Blue Collar Comedy Tour.

Jeff started his career back in 1993 when he released his comedy album You Might Be a Redneck If… In 1994, the album went gold and platinum in 1995. It went platinum 3 times by 1996. In 1995, he released Games Rednecks Play which received a 1996 Grammy nomination for Best Spoken Comedy Album.

In 1995, Jeff starred in the sitcom The Jeff Foxworthy Show. The show premiered on ABC. He has previously hosted Country Weekly’s “TNN Music City News Country Awards” show for consecutive three years. He also hosted Are You Smarter than A 5th Grader? on Fox.

Jeff is a member of the Blue Collar Comedy Tour alongside Larry the Cable Guy, Bill Engvall, and Ron White. The four toured the country and performed for record crowds. In 2004, Jeff launched a new tv show Blue Collar TV which aired on The WB Television Network, Comedy Central, and Comedy Network.

As an author, he has written several books including children’s books. He released his first children’s book Dirt On My Shirt in February 2008. In 2009, he released Silly Street and Hide!!! in 2010. He collaborated with author Brian Hartt on the 2008 book How to Really Stink at Golf.

Jeff has released a total of five comedy albums. One of the albums includes the novelty Christmas song “Redneck 12 Days of Christmas”. The song peaked at No. 18 on the Hot Country Songs charts from late 1995 to early 1996.

Foxworthy has an estimated net worth of $100 million.