Jason Hawes a native of Canandaigua, New York is an American Plumber, tv host, producer, and author. He is the founder of The Atlantic Paranormal Society (TAPS). The organization is based in Warwick, Rhode Island.

He is best known as one of the cast members of Ghost Hunters which he also co-produces. The show ended on October 26, 2016, after its eleventh season. Hawes is now the host of his own show Ghost Nation. The show airs on Travel Channel since October 2019.

Hawes appears to be of average body height and body weight. There is no detailed information about his body measurements. However, this information will be updated as soon as it is available. 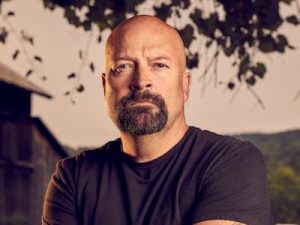 Hawes was born in Canandaigua, New York, United States, and at the age of 8, he moved to Warwick, Rhode Island in 1979. He has yet to disclose information about his parents and siblings. This information will, however, be updated as soon as it is available.

Hawes is a happily married man. He has been married to his wife Kristen Cornell since 1998. Together they have five children; Samantha Hawes, Satori Hawes, Haily Hawes, Austin Hawes, and Logan Hawes.  Hawes has not disclosed further details about his wife and children.

It was at 20 years old that Jason started seeing apparitions. He claimed that his then-girlfriend practiced Reiki and managed to manipulate his life force energy resulting in his apparitions. In 1990, Hawes found Rhode Island Paranormal Society (RIPS). It was a support group for people who had paranormal experiences.

He found The Atlantic Paranormal Society (TAPS) at the age of 22. He went on to co-create the tv show Ghost Hunters on Syfy. The show ended on October 26, 2016, after its eleventh season. In 2019, the show was renewed for its 12th season. Hawes did not return to the show and created his own show Ghost nation which premiered in October 2019 on Travel Channel.

As an author, Jason has written several books about paranormal and sci-fi screenplays. He is a former owner of the Spalding Inn located in Whitefield, New Hampshire alongside Grant Wilson who is also a founder at TAPS. They also work as plumbers at Roto-Rooter. Hawes has held various ghost hunting charity events for charities like Shriners Hospitals for Children.

Hawes has an estimated net worth of $3 million which he has accumulated from his long career as a plumber and tv personality.