Jaden Michael a native of New York City, is an American actor best known for his roles in Wonderstruck in 2017, Vampires vs the Bronx in 2020, and Colin in Black & White in 2021.

Jaden stands at an approximated height of 5 feet 10 inches. According to his pictures, he is of moderate weight. His curly black/brownish afro hair goes perfectly with his brown eyes. There are no further details about the actor’s body measurements. However, these details will be updated as soon as they are available. 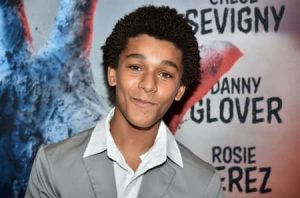 Michael was born and raised in New York City. He was born to his mother Clara Caminero and father whose information he has not yet disclosed. Jaden has expressed so many times how much he loves and adores his mother who has worked so hard for him to be where he is now. Michael is Afro-Latin. He is of Dominican descent. Jaden has two siblings including a sister.

At the age of 17, Michael seems too young to be dating. It appears that he would rather focus on growing his career as an actor. However, he turns 18 in a few months and he might want to get into the dating scene.

Jaden started his career at a young age. At the age of two, his mother put him into modeling. After some time, his mother signed him up with a talent agency. From there, he started appearing in commercials. He modeled at the 2013 Kids Fashion Week: Petite Prade for an Italian retail clothing brand called Diesel.

In 2009, he appeared in the short film Love Seat as Bumblebee. He went on to appear in several short films including; A Home, Any Home, Out There as Ollie, Seed of the Fight as a worker, and Children of Ether. Michael has featured in the 2016 film Custody as David Diaz. His most notable role was as Jamie in Wonderstruck.

As of 2021, Jaden’s net worth is estimated to be in the range of $1 million – $5 million. At only 17, Jaden already has a very impressive net worth. He has gained all his wealth from the multiple roles he has played in film and tv shows including Wonderstruck, and Vampires vs the Bronx.