He is best known for being the founder and co-host of the syndicated public radio program Radiolab with Latif Nasser and Lulu Miller.

Abumrad is the son of Naji Abumrad, a doctor at Vanderbilt University Medical Center and a mother who is a scientist. 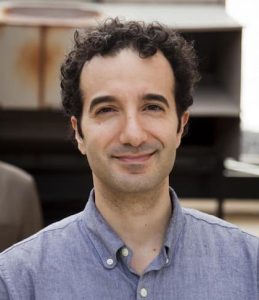 Abumrad married his wife Karla Murthy whom he met in college in 2007. Murthy works as a television producer, and they have two children.

Abumrad studied at the University School of Nashville and later went to Oberlin College, where he studied creative writing and music composition with a special interest in electronic and electroacoustic music, earning his B.A. in 1995.

Abumrad worked as a film composer before deciding to pursue a career in broadcasting. On the Media, PRI’s Studio 360 with Kurt Andersen, Morning Edition, All Things Considered, Democracy Now!, and WNYC’s “24 Hours at the Edge of Ground Zero” are among the local and national public radio programs on which he has covered and produced documentaries.

Abumrad has been producing and co-hosting the nationally syndicated show Radiolab since 2002. His musical experience has inspired Radiolab’s sound. An episode of Radiolab from December 14, 2009, In C contains a musical piece by Abumrad remixing the Terry Riley composition In the case of C.

Also, he created and hosted The Ring & I, a documentary about Wagner’s Ring Cycle’s enduring influence. It earned ten awards after airing nationally and globally, including the coveted National Headliner Grand Award in Radio in 2005.

Abumrad hosted the four-part podcast series “UnErased” in 2018, which told the stories of gay conversion therapy survivors. The creators of the film Boy Erased collaborated on the podcast.

He is a member of the New York Institute for the Humanities.

Abumrad’s net worth ranges from $1 million to $5 million.