A native of Chicago, Harrison Ford is an American writer, actor, and film producer who gained worldwide fame for his starring roles as Han Solo in the Star Wars film series and as the title character of the Indiana Jones film series.

At least five of his movies are among the 30 top-grossing movies of all time at the US box office. He is also known for playing Rick Deckard in the neo-noir dystopian science fiction film Blade Runner in 1982 and its sequel Blade Runner 2049 in 2017; John Book in the thriller Witness in 1985, for which he was nominated for the Academy Award for Best Actor; and Jack Ryan in the action films Patriot Games in 1992 and Clear and Present Danger in 1994.

How Tall is Harrison Ford? Ford stands at a height of 1.85 m. 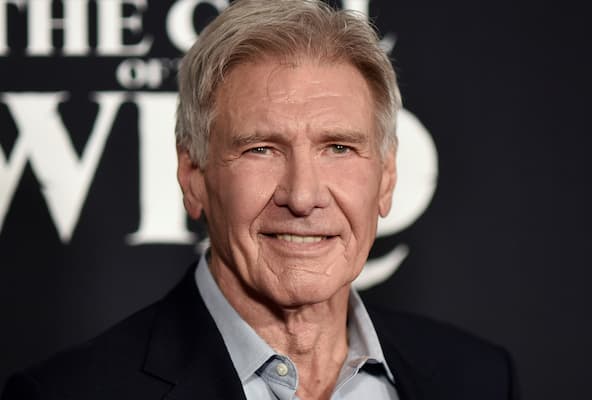 Who Is Harrison Ford Married To? Ford has been married thrice.

Ford’s first marriage was to Mary Marquardt who he got to know during his years as a student and they got married in 1964. The former couple has two children namely; Benjamin Ford (b. 1966) and Willard Ford (b. 1969). They however got a divorce in 1979.

In March 1983, Ford got married to Mellisa Mathison, a scriptwriter of the cult picture of Steven Spielberg – “E.T. the Extra-Terrestrial. Two years after their wedding, they bought land in a quiet town of Wyoming and built a house here. In this marriage, the ex-couple was blessed with two children, Georgia Ford and Malcolm Ford (b. 1990). The couple later separated in 2001, August.

In June 2010, Harrison married actress Calista Flockhart whom he had met in January 2002, during the Golden Globe Awards. They began dating then and got engaged on Valentine’s Day in 2009 and later tied the knot on June 15, 2010. Together, they are parents to Flockhart’s adopted son, Liam Flockhart (b. 2001).

Harrison has 5 children from his three marriages. These are; Ben Ford, who is a restaurateur, Malcolm Ford, a guitarist affiliated with the alternative/indie band, The Dough Rollers. There is also Georgia Ford, an actress, William Ford who is a furniture designer, and Liam Flockhart, his wife’s adopted son.

Star Wars is an American epic space opera franchise, created by George Lucas. It is centered around a film series that began with the eponymous 1977 movie. The first film was followed by two successful sequels, The Empire Strikes Back in 1980 and Return of the Jedi in 1983; these three films constitute the original Star Wars trilogy.

At Star Wars and the next two sequels, Harrison played the role of Han Solo, a male Human smuggler from the planet Corellia who achieved galactic fame as a member of the Rebel Alliance and later the New Republic. Han Solo was born on Corellia, orphaned at an early age, and taken by the pirate Garris Shrike to serve on his crew.

Carrie Fisher released a memoir about her 70’s relationship with Harrison Ford. At that time, Fisher was 19 while Ford was 33 years old and married to his first wife, Mary Marquardt. Harrison admitted that he was given advance warning that Fisher planned to write about their affair (“to a degree”), but declined to go into detail about his reaction.

He later returned to the role again for a 1993 episode of the television series The Young Indiana Jones Chronicles, and even later for the fourth film Indiana Jones and the Kingdom of the Crystal Skull in 2008.

Harrison’s first movie was Dead Heat on a Merry-Go-Round where he played the role of Bellhop in 1966.

Witness, is a 1985 American crime thriller film directed by Peter Weir and starring Harrison Ford and Kelly McGillis. The film focuses on a detective, John Brook (Harrison Ford) protecting a young Amish boy who becomes a target after he witnesses a murder in Philadelphia.

Harrison has never won an Oscar. He has however contended for the Oscars once, losing his 1985 Best Actor bid for “Witness” to William Hurt  of “Kiss of the Spider Woman.”

Before he got his big break as Galatic smuggler Han Solo in 1977, Harrison was working as a full-time carpenter.

He revealed that his principal job at the time was carpentry and that he got the role of standing in for screen tests for director George Lucas, who worked with Ford in American Graffiti. He said that he would help George Lucas audition other actors for the principal parts, and with no expectation or indication that he might be considered for the part of Han. “I was quite surprised when I was offered the part,” Harrison revealed in the AMA.

American Graffiti is an American coming-of-age comedy film. The film is a study of the cruising and rock ‘n’ roll cultures popular among the post–World War II baby boom generation and through a series of vignettes, the film tells the story of a group of teenagers and their adventures over the course of a single night.

Ford has a scar on his chin and in an interview with Parade, Harrison revealed how the scar. He explained that long before he became Han Solo, he had a job at Bullock’s department store near Laguna Beach, Calif. One morning while he was on his way to work, he veered off the road and into a telephone pole while fumbling for his seat belt. He credits slamming his face into the steering wheel and some “inept emergency surgery” for the lasting mark.

In a television interview shown in August 2000, Harrison was asked what influence his Irish Catholic and Russian Jewish ancestry may have had on his life as a person and as an artist and he humorously stated, “As a man, I’ve always felt Irish, as an actor I’ve always felt Jewish.”

Harrison is not dead. He is alive and well.