Hannah Chaddha is an American reality television show personality. she is a contestant on the American reality tv show Big Brother 23. She gets to compete against the other 15 contestants for the chance to win a grand prize of half a million. She has previously worked as a personal stylist.

Chaddha is 21 years old as of 2021. She was born in 2000 in Chicago. She has, however, not revealed any information about her date of birth. This information will be updated as soon as it is available.

Chaddha stands at an average height of 5 feet 5 inches. She is of moderate weight. She has black hair paired well with her beautiful black eyes. However, there is no further information about her body measurements. 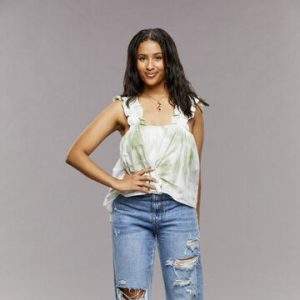 Hannah was born and raised in Chicago. Her parents are from India and South Africa. There is, however, no further information about her parents. In addition, Chaddha has a small sister whose information she has not disclosed too.

Chaddha is one of the contestants in the 23rd season of the American reality television show Big Brother. She competes against 16 other contestants also referred to as houseguests including Azah Awasum, Brent Champagne, Britini D’Angelo, and Derek Frazier. They all get to compete for the chance to win a grand prize of $500, 000.

The graduate student describes herself as simply calculated, composed, and versatile. Her most favorite things to do are; dancing, fashion and styling, traveling, and binging watching Real Housewives. She is a competitive hip-hop dancer.

When asked about her winning strategies, she says, “My strategy for winning the game starts with cultivating personal relationships with everyone in the house. I don’t have to be everyone’s best friend nor do I want to be, but I fully intend on learning about everyone’s strengths and weaknesses”.

She goes on to say, “I won’t have a problem exploiting their weaknesses for my benefit and aligning myself with those whose strengths can compensate for my own shortcomings. I don’t want to play the game on a week-to-week basis, but instead, I want to ensure that with every move I make/competition I win.

The 21-year-old and youngest of all the houseguests further explains that she is not afraid to play hard, get messy, and bathe in people’s blood. In addition, she plans on lying about her occupation and career aspirations because she does want her intelligence to be overestimated.

Chaddha has not yet disclosed any information about her personal life. Therefore it is not clear if the 21-year-old is in a relationship or not. Further information will be updated.